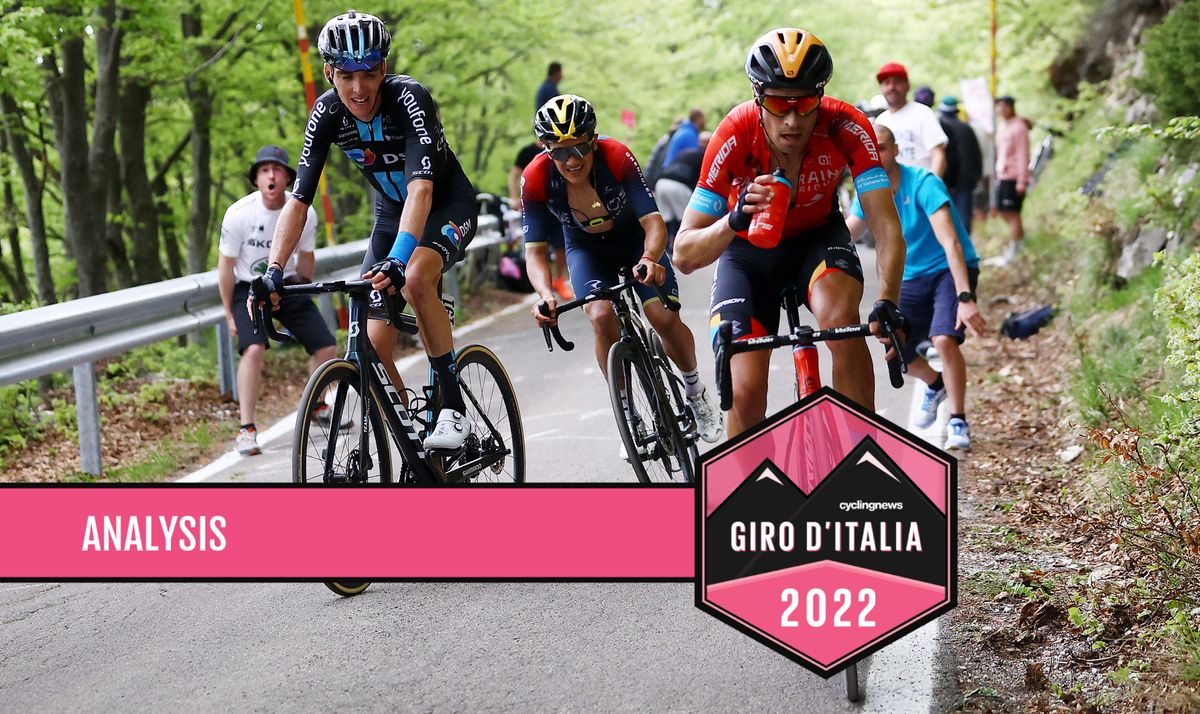 Simon Yates needed a few moments to compose himself after reaching the top of the Blockhaus over 11 minutes down on stage 9 of the Giro d’Italia, adding another wing to the house of pain he has built at this race. He sat against a barrier past the finish line, while a scrum of cameras and microphones formed loosely around him.

A week ago in Budapest, Yates looked the favourite to win the Giro after his confident victory in the time trial over the Danube, but a lot of water had passed under the bridge since.

A crash on the stage to Mount Etna on Tuesday left Yates managing a worrisome knee injury through the rugged terrain in southern Italy, and his BikeExchange-Jayco squad’s concerns were borne out when he was distanced at the base of the Blockhaus. Yates explained that he had been troubled, too, by the heat.

After the finish, a boisterous tifoso pressed himself against the barriers where Yates was seated. “Simon, you can win the Giro!” he shouted, seemingly oblivious to the sombre mood, and then repeated himself for fear the Briton hadn’t heard him the first time around. Yates shook his head as he rose to speak with reporters. The first true mountain test of this Giro had long since delivered its verdict.

Wilco Kelderman (Bora-Hansgrohe) reached the summit around the same time as Yates, his challenge undone by the combination of the Blockhaus and an untimely mechanical issue after the Lanciano. “It just sucks,” the Dutchman said before descending towards his team bus.

Like Kelderman and Yates, home favourite Giulio Ciccone (Trek-Segafredo) was also distanced on the lower slopes of the Blockhaus, and he would lose almost 10 minutes by the top. He knew the terrain better than anybody on this Giro, but that advantage was not without its drawbacks. Once Ciccone lost contact with the Ineos-led train, he knew only too well the damage that would be wrought on the wickedly steep haul to the summit.

Ciccone entered this Giro hoping to take up the mantle left by the retiring Vincenzo Nibali (Astana-Qazaqstan), but Italy looks set for a long wait for a successor to the Sicilian on the roll of honour of this race. As if to reiterate the point, Nibali limited his losses well to place 8th on the stage, just 34 seconds back, while another Italian veteran, Domenico Pozzovivo (Intermarché-Wanty Gobert), fared even better, coming home in the front group.

It was also a sobering afternoon for Hugh Carthy (EF Education-EasyPost), who conceded 3:48 on a climb that ought to have suited him. The Briton is still feeling his way into form and he might yet sparkle in the third week, but his aspirations of overall victory in this most open Giro have already ended.

But while the arduous day in Abruzzo answered some of the questions that had percolated through the opening week, the Blockhaus threw up a great many more. Those high-profile contenders exited the race for pink lower down the climb thanks to the forcing of Richard Carapaz’s Ineos squad, but there was precious little to separate the men left at the front of the race by the summit.

As the Giro breaks for its second rest day, seven riders remain within half a minute of one another at the head of the overall standings, and no individual has yet put himself even half a step ahead of the rest.

The Blockhaus, as promised, forced a serious selection, but still the margins remain tight.

Ineos Grenadiers confirmed that they were the strongest team in the race with the prodigious bout of forcing on the Passo Lanciano and Blockhaus that did for Yates, Kelderman, Ciccone and more. Richie Porte, in particular, caught the eye with a long, long stint of pace-making into a headwind on the middle portion of the final climb, the 37-year-old reprising the sort of role he played for Chris Froome a decade or so ago.

Richard Carapaz, however, was unable to finish off his team’s work as emphatically as the Froome of yesteryear. When the Ecuadorian accelerated 4.6km from the summit of the Blockhaus, the Giro briefly appeared set to meet its padrone, but he couldn’t shake off Romain Bardet (DSM) and Mikel Landa (Bahrain Victorious), who immediately followed his surge.

Both looked to have Carapaz’s measure in the kilometres that followed. Certainly, neither man had been cowed by Ineos’ show of strength on the Blockhaus, nor were they unduly troubled by Carapaz’s initial surge. Landa’s display was all the more remarkable given that he crashed twice earlier in the stage, while Bardet’s assurance was striking.

For a mile or so of steep road, it seemed as though the Giro might rapidly be reduced to a three-way contest, but Carapaz, Landa and Bardet were so evenly matched that none of them was prepared to tow the others to the line. Their move lost momentum as the road began to level off, and their three most persistent chasers clawed their way back up in the final two kilometres, leaving a group of six to contest the stage win.

Jai Hindley (Bora-Hansgrohe) underlined his overall credentials by delivering a powerful sprint to claim his first victory since winning at Laghi di Cancano on the 2020 Giro, but afterwards, the Australian suggested that João Almeida (UAE Team Emirates) had in fact been the strongest of the riders chasing Carapaz, Bardet and Landa.

Other riders grabbed the headlines on the Blockhaus, for reasons good and bad, but Almeida’s was one of the rides of the day. In the overall standings, he now lies second overall, 12 seconds behind maglia rosa Juan Pedro López (Trek-Segafredo), but ahead of all the pre-established favourites. He should not be underestimated.

Bardet (3rd at 14 seconds), Carapaz (4th at 15 seconds), Hindley (5th at 20 seconds), Guillaume Martin (6th at 28 seconds) and Landa (7th at 29 seconds) form a tightly packed group atop the standings as the Giro breaks for its second rest day, and another five riders lie within 1:27 of the lead, including the evergreen Domenico Pozzovivo (8th at 54 seconds). So far, the selection on this Giro has come from the back rather than the front.

Yates’ exit from the GC picture means that Carapaz is now the only previous Grand Tour winner left with a realistic chance of winning the Giro. His ability to withstand the rigours of the infamous third week is not in question. That pedigree, not to mention the strength of his Ineos team, means that Carapaz is still the rider with the shortest odds to win this race, but his remaining rivals will draw heart from how they countered him here.

The Giro came to this corner of Italy on the corresponding stage last year, and while the margins were also tight, the signals were already clear. Egan Bernal’s show of force in the final kilometre of Campo Felice brought him the pink jersey and drained the belief from his rivals. Two weeks from Milan, the direction of travel was already obvious.

This time out, the trek through the mountains of Abruzzo marked only the end of the beginning of the Giro. Nothing is decided yet.