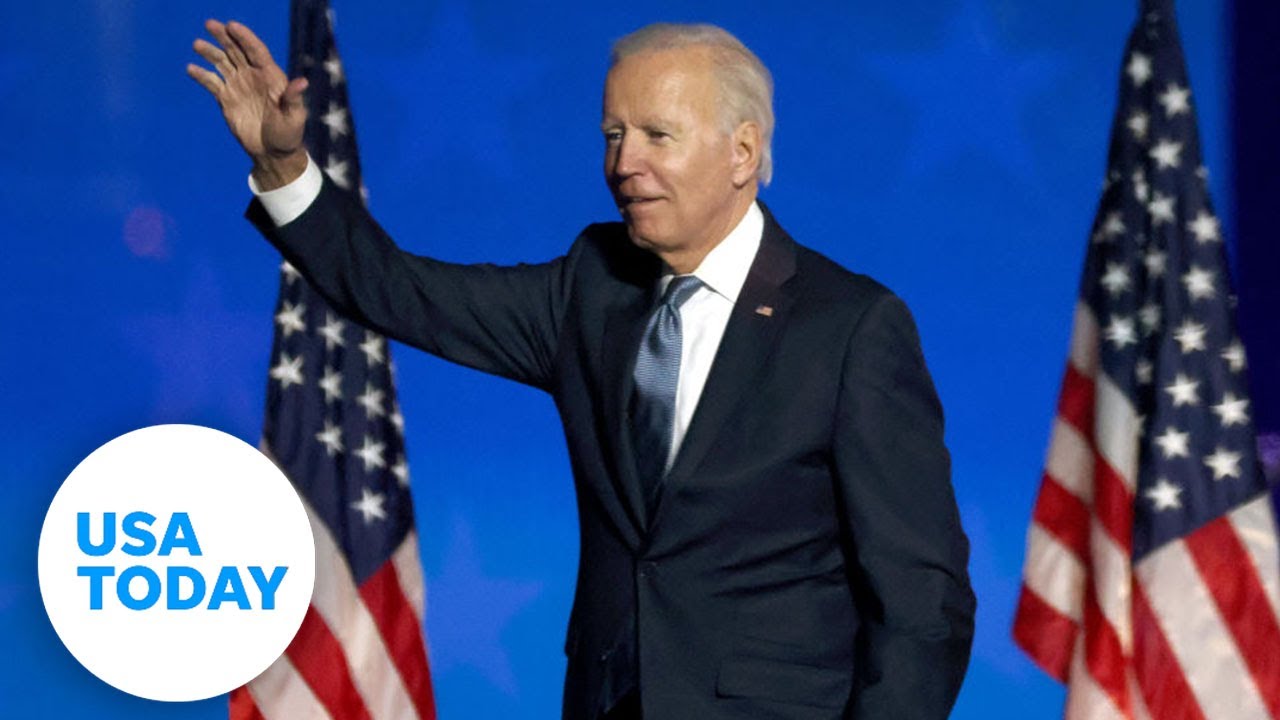 President Joe Biden starts press conference by touting accomplishments, acknowledging challengesAsked if he’s overpromised, Biden says no: “I have probably outperformed what anybody thought would happen.”The event comes a day before the one-year anniversary of Biden’s inauguration as president.

President Joe Biden kicked off a press conference Wednesday in which he will answer questions from the press, on the eve of marking one year in the White House.

It’s a year that has seen inflation soar; COVID-19 dip, then surge with the delta variant, then surge again with omicron; the passage of landmark infrastructure investment legislation and the stalling or failure of other legislative priorities.

And it comes in a month that has brought White House efforts to contain the further spread of the record-breaking omicron variant with the shipping of COVID-19 tests to households at no cost and masks to community spots where Americans can pick up three free N95s, as well as the deployment of the National Guard to help hospitals in six states.

The news conference, which started at 4 p.m. in the East Room of the White House, is his ninth such event, according to a tally by the Associated Press.

Biden acknowledged the hardship that rapidly rising prices have caused for American families but argued that his Build Back Better bill could help curtail growing inflation.

“If price increases are what you’re worried about, the best answer is my Build Back Better plan,” he said.

Inflation hit a 39-year high in December as prices jumped for everything from food to rent to cars. Biden said the way to tackle high prices is a more productive economy, where more small businesses are able to compete and goods can get to the market faster and cheaper.

Biden pointed out that he signed an executive order to tackle unfair competition, “and we’re going to continue to enforce it,” he said.

Despite the economic challenges, there has been progress on the economy, Biden said.

Biden said his administration has created 6 million new jobs, more in one year than any other time.  Unemployment dropped to 3.9%, child poverty fell by nearly 40%, and new businesses applications grew by 30%, he said.

In touting progress the White House has on the COVID-19 pandemic over the past year, Biden admitted that his administration should have started boosting COVID-19 testing earlier.

“Should we have done more testing earlier? Yes,” he said. “But we’re doing more now.”

He acknowledged the criticism he’s faced for testing shortages across the country and pandemic’s persistence that has frustrated the country. But he pointed to the administration’s latest efforts, including the launch of a website where Americans can request free at-home tests.

While some people have suggested Biden should recalibrate his COVID-19 strategy to live with the virus, the president insisted he’s “not going to give up and accept things as they are now.”

“Still for all this progress, we know there’s a lot of frustration and fatigue in this country,” Biden said. “We know why: COVID-19 has now been challenging us in a way that it’s the new enemy.”

He said the pandemic will improve. “Some people may call what’s happening now the new normal. I call it a job not yet finished. It will get better.”

Biden’s approval:More than half of Americans disapprove of Biden’s handling of key issues

Manchin to speak on preserving filibuster during Biden’s press conference

While Biden looks to tout accomplishments during his press conference, Sen. Joe Manchin, D-W.V., is scheduled to speak on the Senate floor at 4:30 p.m. ET on his opposition to a filibuster carve-out to pass voting rights legislation.

The Senate is holding votes Wednesday on the doomed filibuster carveout proposal backed by Biden to change Senate rules to pass voting rights bills with a simple majority. Opposition from Manchin and Sen. Kyrsten Sinema, D-Ariz., is expected to prevent passage.

It will mark the second time in a week one of Biden’s fellow Democrats has undercut the president’s message. Sinema delivered a speech on the Senate Floor last Thursday reaffirming her opposition to filibuster changes less than an hour before Biden arrived at the Capitol to meet with Democrats to push voting rights.

Is a Russian invasion of Ukraine imminent?

The U.S. is threading a delicate needle on Russia and Ukraine.

Secretary of State Antony Blinken stressed to Ukrainian leaders on Wednesday that the United States and its European allies will support the eastern European country as it grapples with the threat of Russian invasion.

But while offering a diplomatic off-ramp to Russian leaders, Biden administration officials are suggesting the U.S. would support an insurgency in Ukraine should Russia invade the country, according to a report Wednesday in the New York Times.

The top diplomat’s trip is part of broader engagement between the West and Russia, after talks between the two countries hit a wall last week. Russia has repeatedly said Ukraine’s drift toward the West and NATO is a threat to its national security and that it is willing to use force to reverse the country’s trajectory.

COVID dominates much of Biden’s term

President Joe Biden did not get a single question about the coronavirus pandemic at his first solo press conference, held at the White House last March.

That’s unlikely to be the case Wednesday.

Infections have been on the rise since the highly contagious omicron variant began sweeping the country last month, causing workforce disruptions and once again overburdening hospitals.

Biden has faced criticism from public health experts and even members of his own party over the shortage of at-home tests and other matters. The president is likely to tout recent actions, including Tuesday’s launch of a website to distribute free, at-home COVID-19 tests. The White House announced Wednesday it will also distribute 400 million free, high-quality masks through pharmacies and community health centers.

Still, Biden could be pressed on whether those actions are too little, too late and what more the administration can do as the pandemic approaches its third year.

Biden began his presidency saying his top priorities were addressing the pandemic its economic fallout.

How to order free testing kits from the government

While COVIDTests.gov was expected to start accepting orders on Wednesday, an “Order free at-home tests” button was added Tuesday, which brings users to usps.com/covidtests to order four at-home free tests.

USA TODAY tested the site and got a message that “COVID-19 tests will start shipping in late January.” The Postal Service will only send one set of  four free at-home coronavirus tests to valid residential addresses, the site said.

What is the filibuster?

One of the topics President Biden will almost certainly be asked about on Wednesday is the filibuster — but what is it, exactly?

The filibuster is a controversial Senate rule that can advance or stall key legislation.

Once an obscure procedure, it”s been increasingly used to stall priorities of the majority coalition, most notably on issues relating to race and civil rights.

When senators have been at their most intransigent, majority parties have created filibuster exceptions for key areas of legislating, including for executive and judicial appointments.

Learn more here:What is the filibuster? A look at the Senate’s consequential quirk and debate on its future

Biden nominates Muslim woman to the federal bench, a first in US history

President Joe Biden nominated a Muslim woman for a federal judgeship for the first time in U.S. history Wednesday as part of his administration’s push to reshape the federal judiciary with diversity.

Nusrat Jahan Choudhury, legal director of the American Civil Liberties Union of Illinois, is Biden’s nominee for the United States District Court for the Eastern District of New York. If confirmed by the Senate, Choudhury would become the first Muslim woman to serve as a federal judge and the first Bangladeshi American.

The latest round of eight nominations – the 13th since Biden took office one year ago – brings Biden’s total judicial nominees to 83 and continues his administration’s efforts to put more women and judges of color on the federal bench.

Get the whole story:Biden nominates Muslim woman to the federal bench, a first in US history as he diversifies the judiciary

On the same day that President Joe Biden is set to speak to the press, the White House announced that his administration will start shipping 400 million free non-surgical N95 face masks to distribution sites nationwide this week to fight the surging omicron COVID-19 variant.

Americans will be able to pick up their masks at one of “tens of thousands” of pharmacies, thousands of community centers and other locations across the country beginning late next week, the White House said.

The move comes as the rise in omicron COVID-19 cases has overwhelmed hospitals across the country, leading to mounting criticism over Biden’s ability to contain the pandemic. Recent polls have found more Americans disapprove of the president’s handling of the pandemic than approve, undercutting a onetime strength for Biden.

The White House expects the program to be fully up and running by early February.

Read the full story here:Biden administration to ship free 400 million N95 masks across the US starting this week

President Joe Biden’s press conference comes as his approval rating has been on a slide for months, led by concerns over his handling of the economy and the COVID-19 pandemic.

A Quinnipiac University poll last week found only 33% of Americans approve of Biden’s job performance – his lowest mark so far of his presidency – while 53% disapprove.

The results prompted White House Deputy Chief of Staff Jen O’Malley Dillon to issue an internal memo calling the poll an “outlier.” She noted that Biden’s approval rating remains significantly higher, 43%, in the FiveThirtyEight average of polls and questioned the Quinnipiac poll’s methodology.

Despite the poll finding less than 40% of Americans approve of Biden’s handling of the economy and coronavirus, the White House is touting these areas as Biden completes his first year in office.

White House press secretary Jen Psaki previewed a pair of charts at Tuesday’s press briefing that highlighted 6.4 million jobs created since Biden took office, 74% of Americans fully vaccinated and a fall in the unemployment from 6.4% to 3.9%, among other metrics.