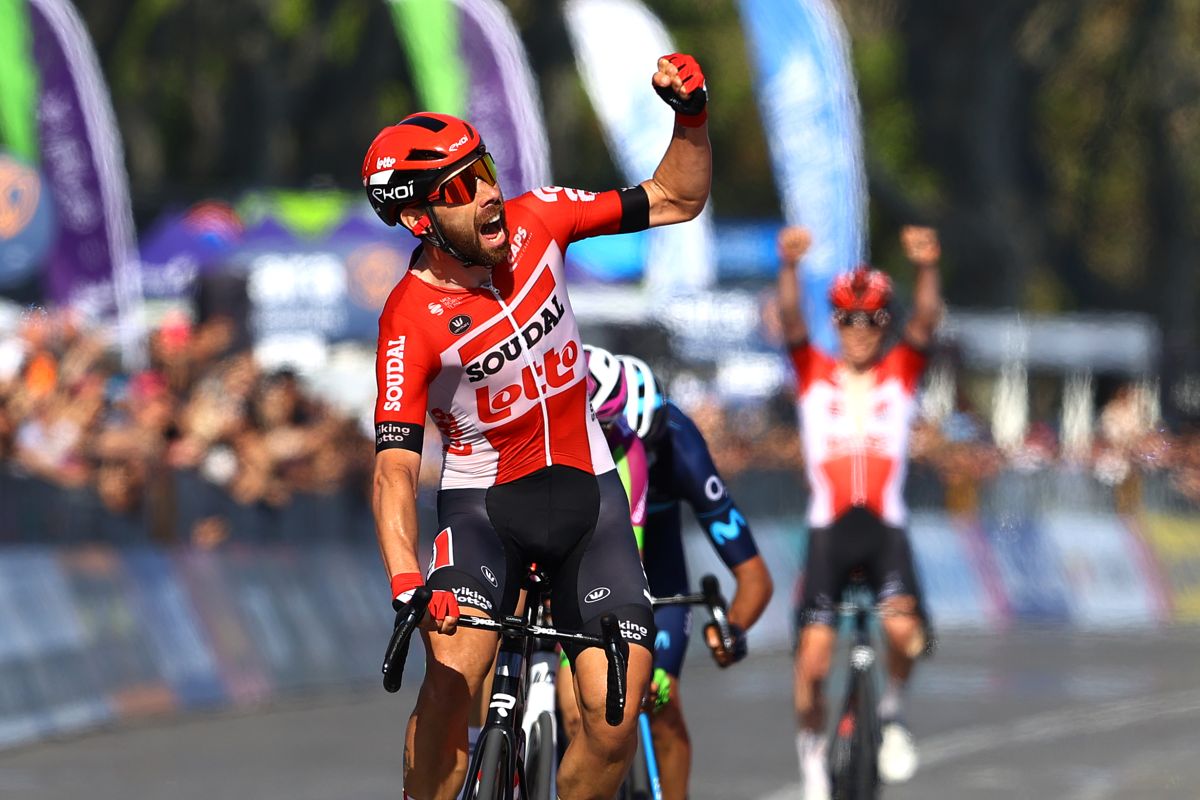 Thomas De Gendt (Lotto-Soudal) won stage eight of the Giro d’Italia 2022, after a counterattack which saw the day’s favourite Mathieu van der Poel (Alpecin–Fenix) forced to chase into the very last kilometre of the race.

De Gendt punched the air to celebrate his victory, having taken on the lion’s share of the work in what eventually became a break of four riders.

In second, but barely contesting the sprint, was Davide Gabburo (Bardiani–CSF–Faizanè), followed by Jorge Arcas (Movistar). Behind, the final rider in the successful break, Harm Vanhoucke (Lotto-Soudal), celebrated his teammate’s win.

The 149 kilometre stage came down to a nail-biting final, with Van der Poel and Biniam Girmay (Intermarché–Wanty–Gobert Matériaux) just seconds behind the leaders, having chased from around 40km to go, following the splintering of a day-long break.

Heading into stage nine, which will finish atop of the Blockhaus climb, Juan Pedro López (Trek-Segafredo) continues to lead the GC, with Lennard Kämna (Bora-Hansgrohe) second and  Rein Taaramäe (Intermarché-Wanty-Gobert Matériaux) third.

Stage eight’s parcours was a short but intense affair. Beginning in Napoli the riders headed to Bacoli, before embarking on five laps of a 19 kimometre circuit, ahead of an about-turn back to Napoli for a closing sprint along the Via Caracciolo seafront.

Whilst far from a mountainous race, a series of undulating climbs left little opportunity for respite on this Giro d’Italia 2022 route, with the winner highly likely to come from a reduced bunch.

Attacks began from the drop of the neutral flag, with Mathieu van der Poel heavily involved in efforts to force a break. His early attacks were pulled back, but after just 6km of racing, he was away solo.

The presence of a breakaway specialist like De Gendt off the front of the race inspired confidence, with more riders making the move – eventually resulting in a group of 20 trailing 10 seconds behind Van der Poel.

With 55s over the peloton, the chasing group absorbed Van der Poel with 135km to go, the 21-strong escapee bunch gaining a one minute gap come the 133km remaining mark.

Back in the peloton, Trek-Segafredo’s riders worked hard to protect maglia rosa leading the Giro d’Italia 2022 standings, Juan Pedro López, but with little help from the remainder of the peloton, there was 2-07 between the two groups on the road.

The first intermediate sprint was a relatively calm affair, Girmay taking the honours over Zardini and Schmid.

Slipping under the 100km to go mark, the break was charging through the course at 55.7kph, with the peloton at a slower 47.5kph.

The break still had just over two minutes on the peloton as they made their first ascent of the 2km Monte di Procida, a climb which they’d crest a total of four times, the final ascent becoming a classified test. De Gendt was the first rider to the top, with Van der Poel continuing to drive the pace.

Soon after, the breakaway had its first casualty – Sütterlin detaching himself from the group of 21, and collecting bottles from the team car to ferry back to the bunch – giving the De Gendt/Van der Poel selection a total of 20 riders.

Up front, Van der Poel grabbed a bag of ice to cool himself down, cloudless skies making for a hotter “feels like” than the 22 degrees Celcius temperatures would belie.

With 61km remaining, Mark Cavendish (Quick-Step Alpha Vinyl) appeared to be losing his grip on the back of the peloton but was able to claw his way back on once the climb leveled out. Meanwhile, the break’s lead exceeded three minutes.

At the 46km to go mark, when the gap had reduced to 2-36, Van der Poel made his move, dramatically jumping out of the saddle with a powerful attack. Behind, the riders of the break were strung out, with Girmay, Schmid and Poels joining him, just as Van der Poel glanced over his shoulder to see who had made it to his self-appointed lead selection.

However, the attack wasn’t enough to distance the 20 strong group of escapees. Soon, the break was largely complete – in time for a new move, made up of De Gendt, Gabburo, Arcas, Ravanelli and the Belgium’s team mate, Vanhoucke.

Hitting the 40km to go mark, the new leaders had gained 20 seconds on the rest of the break, with the time to the peloton at 3-35.

Now finding himself in the chase group, Van der Poel was working hard on the front, alongside Girmay, with a concerted rotation still failing to get closer to the five out front.

On to the Monte di Procida once again, with 35km to go, the leaders had 29s. De Gendt was taking the lion’s share of the work, whilst Ravanelli dropped, reducing the leaders to four. Behind, Van der Poel’s strength resulted in another splinter group of eleven, the advantage of De Gendt et al coming down to 15s at 33km left.

At the top of the Monte di Procida, it was De Gendt who took the KOM, his team mate Vanhoucke second, with Movistar’s Arcas third.

As the road continued to undulate after the classified climb, the front four increased their lead to Van der Poel and Girmay’s group of 11, to 41s at 27km left. More attacks reduced the chase group to five: Schmid, Van der Poel, Girmay, Poels, and Martin. However, gaps kept opening up, with little cohesion compared to the four at the front of the race.

Coming into the 8km to go mark, the gap to the chasers was holding steady, at 28s, suggesting there was little chance of Van der Poel, Girmay and the rest of the chasers making it to the front of the race.

The action began to unfold in the peloton, Bora-Hansgrohe’s Lennard Kämna putting in an attack, but López was immediately on his wheel, revealing little appetite for losing any of the 38s GC advantage he had on Kämna at the start of the stage.

At the 2 kilometre point, Van der Poel and Girmay had seemingly dispatched their companions, and were just 9s behind the leading four. Coming into the finish sprint, all six riders were in view, but the chasers weren’t going to make it.

It was De Gendt who pulled from the rear of the group for a final sprint, after a leadout from Vanhoucke, punching the air having won with a sizeable gap to Gabburo, with Arcas rounding off the podium.