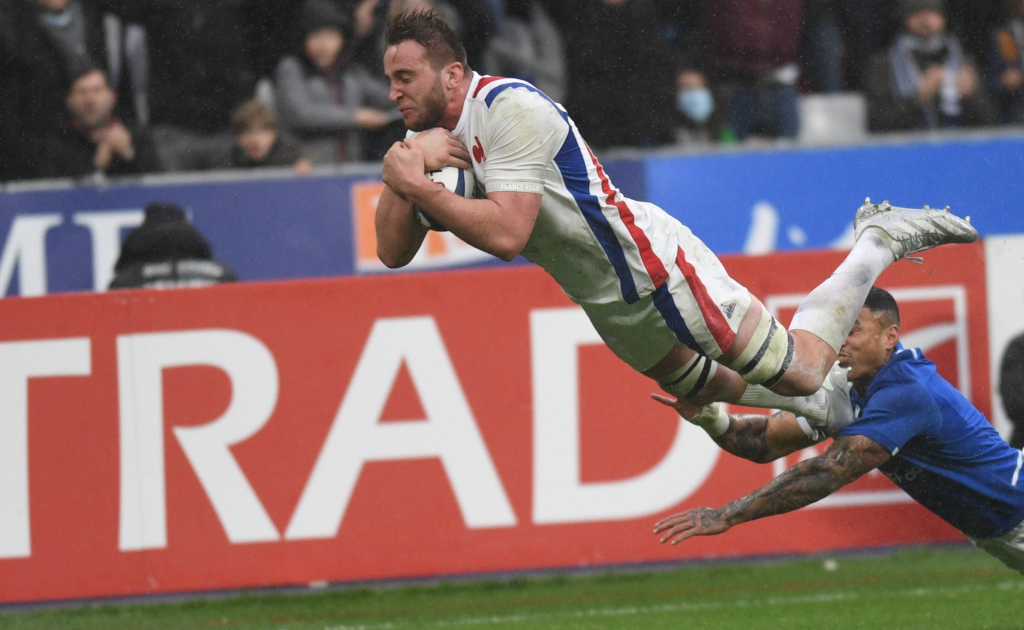 Following a 37-10 victory for France over Italy in their Six Nations fixture, here’s our five takeaways from the match at the Stade de France.

A Gabin Villiere hat-trick finally saw off a doughty Italian effort as he crossed in the final play of the game to see a rather stuttering France take the spoils 37-10.

However, Italy can be mightily proud of their performance, scoring the opening try through Tommaso Menoncello and holding the lead for a good proportion of the first half.

Heavy rain limited France’s ambition with ball in hand and, combined with some tigerish defence and spoiling from Italy, they really struggled to exert their perceived superiority until the latter stages of the game, when Damian Penaud started to cut free and show his brilliance with ball in hand.

Nevertheless, France take a bonus-point win in the first round of the Six Nations. They’ll be delighted with the result, but perhaps less so pleased with the performance.

If anyone had even mentioned to you pre-match that the Italian duo of Paolo Garbisi and Stephen Varney were in the same bracket as the rather illustrious French pairing of Antoine Dupont and Romain Ntamack, you might have suggested they wear a strait-jacket for the duration of the game.

However, the Azzurri pair matched and, at times, eclipsed the Les Bleus couple, with Varney clever in snipe and box-kick, and Garbisi putting in some lovely touches, including a pin-point cross-field kick to set up Menoncello’s try. Garbisi has been keeping Handre Pollard out of the Montpellier side this year and his progress has been very impressive this season, with his performance today proving that he’s going to be the Italian 10 for a long time to come.

Whilst Dupont battled manfully, Ntamack seemed way off the pace, almost disinterested at times; a huge contrast to his performance versus New Zealand in November. With Matthieu Jalibert looking as if he’ll be fit for Round Two, it seems now that the French fly-half battle has been resumed.

Italy will be delighted with many aspects of their play today, and a lot of that can be put down to the number of Benetton players taking a club understanding into the Test arena. Their half-backs have already been mentioned, but now it looks as if they’ve got two international-standard wings, with Menoncello becoming the youngest try-scorer in the tournament since Wales’ Keith Jarrett crossed versus England in 1968, and the outstanding Monty Ioane on the other.

In the back-row, Toa Halafihi added bulk and gain line presence alongside the always formidable Seb Negri. Up front, the front-row had their moments against the French eight, with replacement Ivan Nemer giving Demba Bamba a torrid time in a couple of scrums towards the end.

Importantly, they played for 80 minutes, a testimony to their fitness and to the exposure they’re enjoying for their clubs in Europe. It might have been yet another loss, but there was plenty for the Italian players to be pleased about.

Common wisdom has it that France had question marks over two positions prior to this match – left wing and tighthead. The wing question has been responded to well, as Villiere’s performance was outstanding. His three tries are an obvious take out, but his work rate around the pitch, his footballing skills and his aerial competence all combined for his man of the match award.

At tighthead, Uini Atonio might be a one trick pony (or, more accurately, a carthorse) but it’s a good trick and he ensured a powerful and low scrum until the fatigue from carrying 140kg around the paddock finally set in. However, his replacement, Bamba, whilst dynamic in the loose, is still technically lacking as a tighthead and struggled in the set-piece.

Fabien Galthie will be delighted at the performance of his back and second-row. Cameron Woki was simply everywhere – he is one of the most complete forwards in world rugby and looks to be getting better and better with each game. Gregory Alldritt was equally impressive, running all day, hammering the Italian defensive line, smashing breakdowns and carrying like a demon, whilst Anthony Jelonch showed once again why he’s so highly-rated by the coaching team as he crossed for his first Test try.

For Italy, England’s visit cannot come soon enough. The Red Rose are the only Six Nations team they’ve never beaten and, whilst it’s a tad premature to talk up their chances, bearing in mind Eddie Jones’ men will be desperate to gain a victory in their only ‘gimme’ fixture of the tournament, the Azzurri will rather fancy this match. They know they have pace on the wide outside, a very competent pair of half-backs and a competitive set-piece, and they’ll be absolutely relishing a crack at the English.

For France, they will be particularly worried about Ireland’s visit, especially considering their squad – many of them recovering from the ravages of Covid – have a day less to recover from the battering and bruising they took courtesy of a committed Azzurri. They’ll also be concerned about the number of silly penalties they conceded on the open play offside line, where on several occasions they rushed too early or failed to stay behind the final foot.

Nevertheless, this match, considering the conditions, was a great testimony to France’s fortitude and Italy’s new found confidence, and both sides will gain a degree of confidence from their opening outing.