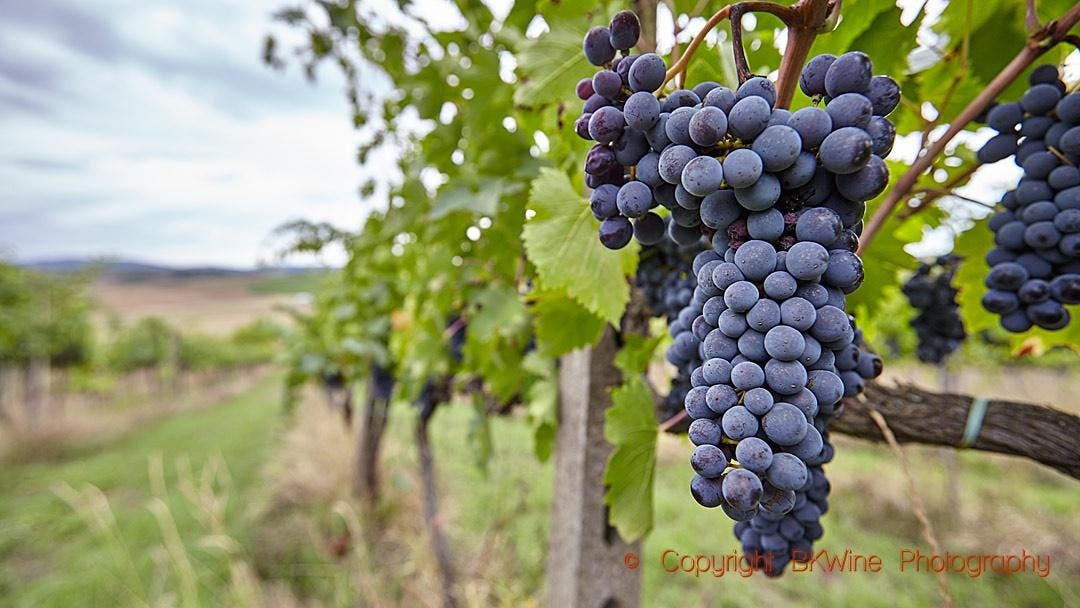 There is something distinctly Italian about sangiovese. Maybe not so surprising as it is the most planted grape variety in Italy. Widely present in Tuscany, where we find it in Chianti, Chianti Classico and Brunello di Montalcino, it is also grown in various other Italian regions. It combines freshness, tannins and a light body which (often) makes it easily recognizable. It’s a grape for the dinner table.

Sangiovese was mentioned in writing in the 16th century in Tuscany and Romagna. In the 19th century, it spread over the central and southern parts of Italy. Its origins are probably in Tuscany, but it may have some ancestors further south, perhaps in Calabria.

In the past, sangiovese wines tended to be relatively light in style, sometimes with a dry finish. Today they have more fruit and concentration, but they are never heavy wines. The grape grows on almost 150,000 acres in Italy, so style and quality vary. Sangiovese is available in all price ranges.

Good quality wines of sangiovese have freshness and elegance. They often have a pleasant acidity and a fair amount of tannins. A typical sangiovese is quite light, both in colour and in body. Cherries and tobacco are among the aromas.

According to many producers, sangiovese is a finicky grape. It is adaptable and can thrive in different environments. But, they say, for the best quality, it requires specific conditions. Limestone in the soil is considered specifically beneficial to quality. The grape is susceptible to grey rot attacks due to its thin skin, so canopy management to keep the foliage airy is needed. Sangiovese is, on the other hand, resistant to drought, an advantage in many places in Italy. It matures slowly and late and thrives in bright and sunny weather.

Sangiovese is used either on its own or blended. The most prestigious wine, brunello di montalcino, is always 100% sangiovese as are some chianti and chianti classico. In fact, today, we find many wines in Italy made with only sangiovese. It used to be more unusual. The opinion then was that the tannins in sangiovese needed to be softened with other grapes, even sometimes with white grapes as was the case in Chianti in earlier years.

We encounter different styles of sangiovese today. A modern style that is softer, less tannic and sometimes rather uninspiring. There is also the more traditional style that retains the astringency that goes so well with food. How the producer ages the wines – in small and new oak barrels, older oak barrels, larger barrels or steel tanks – also affects the style and taste of the wines and can hide the grape character, especially if the oak flavours are exaggerated.

A chianti must be at least 75% sangiovese, a chianti classico at least 80%. (Chianti and chianti classico are two separate appellations/sub-regions in Tuscany.) You can blend with mainly canaiolo and colorino. Since a few years back, the producers can use small amounts of French grapes such as cabernet sauvignon and cabernet franc.

The town of Montalcino overlooks the 2,000 hectares of sangiovese or brunello as the grape is called here. Clemente Santi at the Biondi Santi estate created the wine brunello di montalcino using a clone of sangiovese which he called brunello. In 1966 Brunello di Montalcino obtained its DOC, and in 1980 its DOCG (the highest level of the Italian wine classification), as one of the first. Soon after, brunello became a world celebrity. A brunello is always 100% sangiovese.

At best, brunello has a great intensity in the aromas, lightness and elegance in the body and smoothness in the aftertaste. The characteristic sangiovese tannins are there, but the wine is always balanced.

Vino nobile di montepulciano was also one of the first DOCGs. The wine is famous but does not have the same status as brunello. Vino nobile can be 100% sangiovese, but the producer can choose to blend it with up to 30% other varieties.

On the Tuscan coast the Maremma region grows sangiovese, locally known as morellino. Morellino di scansano DOCG is the most famous wine.

In Umbria, montefalco rosso is made with sangiovese. In Emilia-Romagna, sangiovese di romagna used to have a bad reputation, but today some of these wines are delicious. Le Marche also has some sangiovese, and you can find the grape as far south as Puglia and Sicily.

Outside of Italy, sangiovese is harder to find, but the number of countries growing it has increased in the last ten years.

The French Mediterranean island of Corsica grows sangiovese under the name of niellucciu. It covers around 3,700 acres. Corsica is a sunny island, and wines from niellucciu are full-bodied and structured with both red and dark berries in the aromas, such as black currants, blackberries and raspberries. On the nose, you find fresh herbs and liquorice as well. Corsica also uses niellucciu for rosé wines. Actually, 70 % of the wines on the island are rosé.

Argentina has just over 3,000 acres of sangiovese, but you don’t notice it much. It was planted in Mendoza during the second half of the 19th century. A hundred years later, it was outmanoeuvred by malbec and the Bordeaux grapes. Maybe we will hear more about Mendoza sangiovese in the future. Some enthusiasts of Italian descent would like to bring the grape back into the limelight.

Main countries where sangiovese is grown: