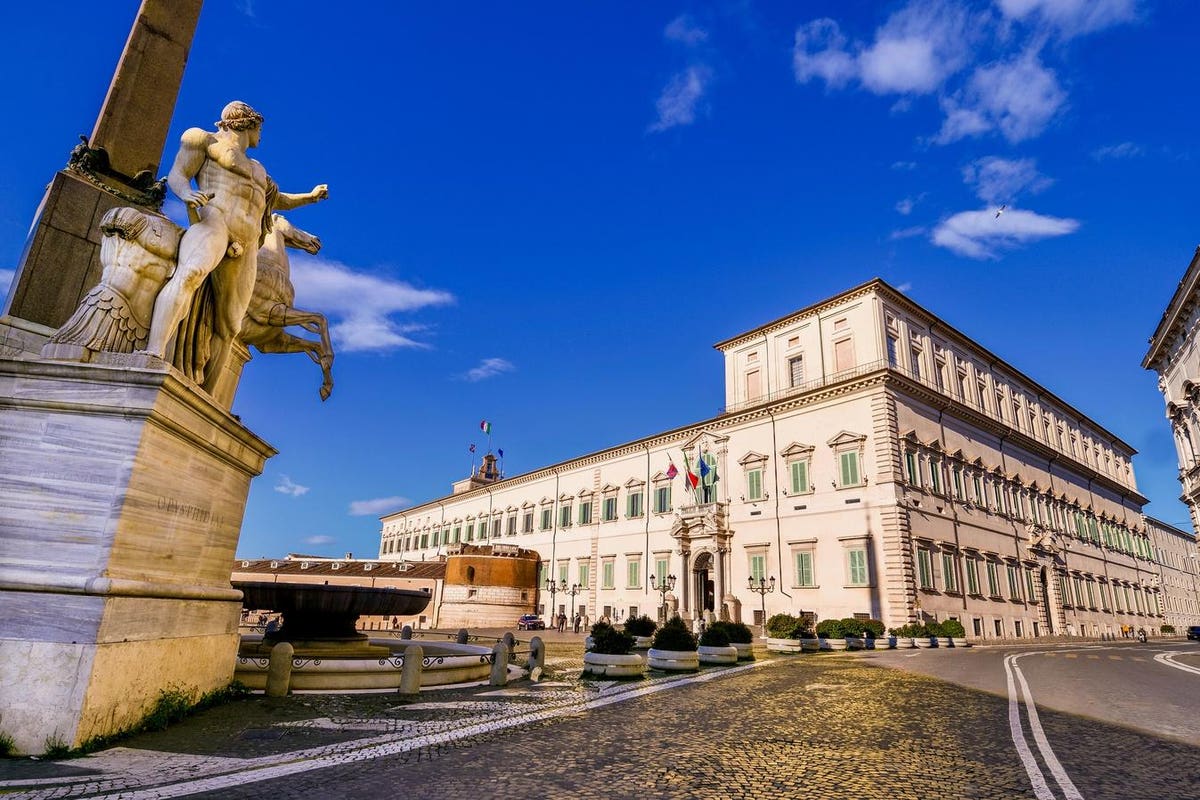 The Palazzo Quirinale is one of Rome’s most important buildings, the Italian president’s official residence in the capital, a place sometimes described as Italy’s “White House.” Many travelers have yet to visit it but everyone should try to—the Quirinale offers magnificent rooms filled with elaborate architectural details, fine art, along with modern design, and contains some of the best collections of European and Italian decorative objects in on the continent. “It represents major epochs in Italian history—the papacy, Napoleon, the royals, and the Republic,” says Marco Lattanzi, art historian for the Presidency of the Italian Republic, who recently took me on a tour of the palace’s important rooms. “The Quirinale symbolizes the history and meaning of the Republic, and the different cultures that arrived on the peninsula [over centuries) and have given the country its strength and uniqueness.”

While very much steeped in the riches of the past, this grand structure has found an impactful way to integrate achievements of the modern world too. “Sergio Mattarella’s contribution has been to add contemporary art and design objects, representing the Republican period of Italian history throughout the Quirinale,” says Lattanzi.”These pieces [showcase] the labor of a nation, and the genius and creativity of its people.” (Mattarella, recently re-elected to a second term, serves as Italy’s head of state and appoints the prime minister. Mario Draghi, the current prime minister, is based at Palazzo Chigi.) Now you’ll find pieces by such modern masters as Giorgio de Chirico, Renato Guttuso, Gio Ponti, Ettore Sottsass and Aldo Rossi interspersed among rooms originally conceived for papal and royal glory. Mattarella has also spearheaded the Quirinale Contemporaneo project, begun in 2019, with the goal of showcasing more seminal modern works in the palace each year.

Perched on the highest of Rome’s seven hills, the Quirinale is far larger than most presidential residences, containing some 2000 rooms (the White House has 132, France’s Elysée Palace 365). “Even though it was built over centuries, the palazzo retains a harmonious structure,” says Lattanzi. The work on the current property began in the 1500s by Pope Gregory XIII, he explains, the last wing completed some two hundred years later. The palace has been home to more than two dozen Popes, several kings and 12 Italian presidents. Napoleon planned to make the Quirinale one of his imperial residences, but his empire collapsed before he could take up residence.

The Palazzo Quirinale presently holds tours Friday to Sunday from 10 AM to 4 PM (except August), which must be booked at least five days in advance. Tours are only in Italian (group tours conducted in French or English can be arranged ahead of time), but the Palazzo Quirinale has an excellent website with virtual tours and information about particular rooms and the collections in four languages.

Below find some of the reasons not to miss this exceptional landmark.

The Palazzo Quirinale has one of the best vantage points in Rome. Views from the nearly 10-acre garden provide a sweeping panorama of the city, taking in St. Peter’s basilica, five kilometers away. Ancient Romans built temples in the area—one to the god Quirinus, says Lattanzi, which gave the hill, and subsequently the palazzo, its name. Originally the vineyard and gardens for a nearby villa, the property became a papal summer residence in the late 16th century, because its location offered a cooler setting in summer than the lower-lying area where Saint Peter’s was built, he says. “The weather was nicer here, with a drier climate than at the Vatican, which was hot and humid.” The grounds today are studded with palm trees, and include a manicured Italian-style garden, an English garden, a stylish 18th-century structure called the Coffee House, and an underground area with artifacts from a Roman domus from the 2nd century AD.

The Paulina Chapel. Dating from the early 1600s, this chapel was built by a Borghese pope, Paul V, and designed not only to reflect the power and majesty of the papacy, but also to have the same dimensions as the Sistine Chapel, says Lattanzi. “Four popes were elected here in the 1800s.” While ornate—there’s an intricate gilded ceiling, a rare Gobelins altar tapestry and multicolored marble floor—the chapel retains an airy feel; today it is the site of regular Sunday concerts. (For more information see Concerts in the Pauline Chapel.)

The Great Hall of the Cuirassiers. This is the Quirinale’s grand reception room, and its largest, where many high-profile presidential events are held. The architectural and artistic elements were added primarily during the palazzo’s papal period, when the room was also used to receive important visitors, a fact commemorated in the long frescoed frieze chronicling ambassadorial missions from Japan, Persia and Congo, says Lattanzi. “They depict the VIPs of the era,” he notes. Another lengthy fresco runs beneath it, added during the time when the Savoys lived at the Quirinale, and illustrates the symbols of the cities that made up Italy after unification. The royal family’s coat of arms centers the lavish ceiling, its patterns and graphic shapes repeated in the floor’s marble design, explains Lattanzi. The room is named for the Cuirassiers, a company of soldiers originating in the 1600s who guarded the Savoy royals, and in later centuries Italy’s kings. Today they protect the president and the palace.

Office of the President of the Republic. A quietly elegant room, the office was once King Umberto’s work space and synthesizes a range of historic styles and art works; it is where the president meets with other world leaders. There’s a Renaissance-style ceiling, a French bureau plat that came from Parma (holding a computer), 18th-century tapestries portraying rural scenes, as well as contemporary works, Concetto Spaziale, Venice Moon, by Lucio Fontana positioned over an antique desk and the Boboli table by Cassina.

The Hall of Mirrors and Grand Ballroom. Versailles started the trend for lavish mirrored halls in the 1600s, and palaces throughout the continent followed suit, establishing their own glittery spaces to reflect a monarch’s wealth and power (mirrors were expensive status symbols at the time). Princess Margherita, later to become queen consort of Italy, who enjoyed significant popularity in her day, says Lattanzi, pushed to have the hall decorated in the regal rococo style favored by European courts. The Grand Ballroom is another large ceremonial space (new governments are sworn in here), with a sumptuous ceiling fresco celebrating the unification of Italy, and richly embellished walls.

The other exquisite rooms. There is no shortage of stately rooms in the Quirinale, which can be used for various functions, like the First State Room with two of the palace’s important Don Quixote tapestries; the Hall of the Ambassadors, where the king would receive foreign emissaries; the Hall of Hercules, which became the throne room in 1940; the Bronzino Room with tapestries created from designs by the famous painter.

The collections of tapestries, porcelains and clocks. The palace is a trove of the finest Italian and European decorative objects. There are 261 tapestries representing pieces from ducal states and royal territories that existed on the peninsula (before unification) and created at historic factories like Gobelins and an atelier set up by the Medicis. More than 100 tapestries depict stories from the life of Don Quixote based on the novel by Cervantes, which became famous in Baroque-era Europe. The porcelain collection is similarly diverse with china and objects made by the best producers in 18th- and 19th-century Europe, like Sèvres, Ginori and Meissen.  The clocks make up another regal collection, many coming from regional palaces and representing a range of decorative styles from Louix XIV to Second Empire.