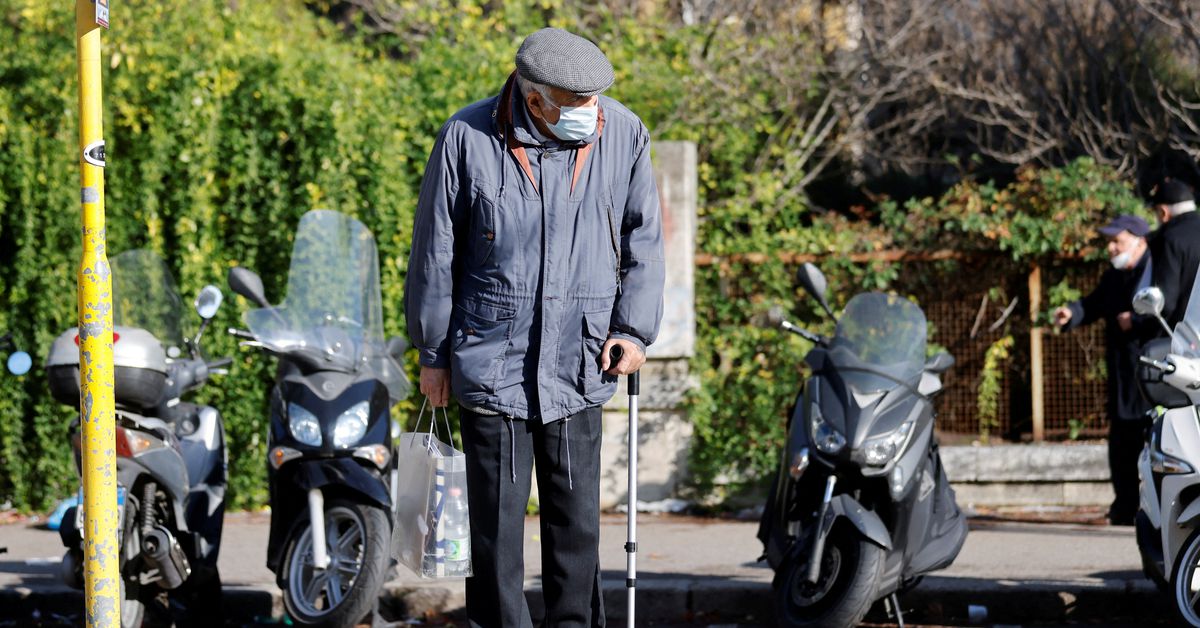 A man wearing a face mask waits for a tram, as the region of Lazio makes face masks mandatory outdoors in all areas, as coronavirus disease (COVID-19) cases rise and Christmas nears, in Rome, Italy, December 23, 2021. REUTERS/Yara Nardi

MILAN, Jan 28 (Reuters) – As the Omicron variant swept Italy late last year, it was unvaccinated elderly people and those who had not had a booster dose four or more months after their initial shots who were most likely to go to hospital or die from COVID-19, according to data and doctors.

Cases in hospitals have started to plateau, offering a sign that the current wave – which started with the emergence of Omicron in late November and pushed infections to record highs – may be close to peaking, doctors say.

The data covering the period Nov. 19- Jan. 2 and published in recent weeks provide some of the most detailed insight into who was likely falling very ill from the newest coronavirus variant.

It also highlights the risks posed by the virus even as studies have shown Omicron causes milder illness compared with previous variants.

The rate of hospitalisation was 248.5 per 100,000 unvaccinated people in the period Dec. 3-Jan. 2, according to the most recent National Institute of Health (ISS) numbers published on Saturday.

The data did not say if the cases were Omicron.

Within the unvaccinated group, people over 80 years old accounted for the vast majority of admissions, followed by 60-79 year olds.

A similar picture is played out in ICU and mortality records: people being admitted to intensive care totalled 31.3 per 100,000 people who had not been vaccinated, up from 23.1 in November.

A smaller portion had received two doses of a vaccine but more than six months earlier and almost none had had a booster shot.

“At the moment all my patients in the ICU are unvaccinated,” he told Reuters on Tuesday.

While Omicron is now the predominant variant in Italy and across the globe, there are still cases of Delta circulating. It accounted for almost 11% of cases worldwide, World Health Organization data this week showed. read more

Currently Lorini has 16 ICU patients with the Delta variant and 10 also with Delta recovering after a spell in the ICU.

He expects admissions to drop in a week or so as the infection rate has flattened out.

Many governments around the world have scrambled to deploy booster shots to restore immunity against Omicron.

In Italy, the rate of hospitalisation was 37.2 per 100,000 people who had received two doses more than four months earlier.

Nonetheless, doctors say that many people who were vaccinated but had underlying severe disease had also been admitted to hospital.

Marco Vergano, a doctor at the intensive care unit of the San Giovanni Bosco Hospital in the northwestern city of Turin, said he has seen an increase since Christmas in patients who have been vaccinated but whose immune systems are compromised because they are undergoing cancer treatment or transplants.

“The increase in this type of patient is undoubtedly linked to Omicron,” he said.

Out of the 150 COVID ICU patients in the region of Piedmont, between 20-25% are patients who are vaccinated but are fragile and immuno-compromised, he said.