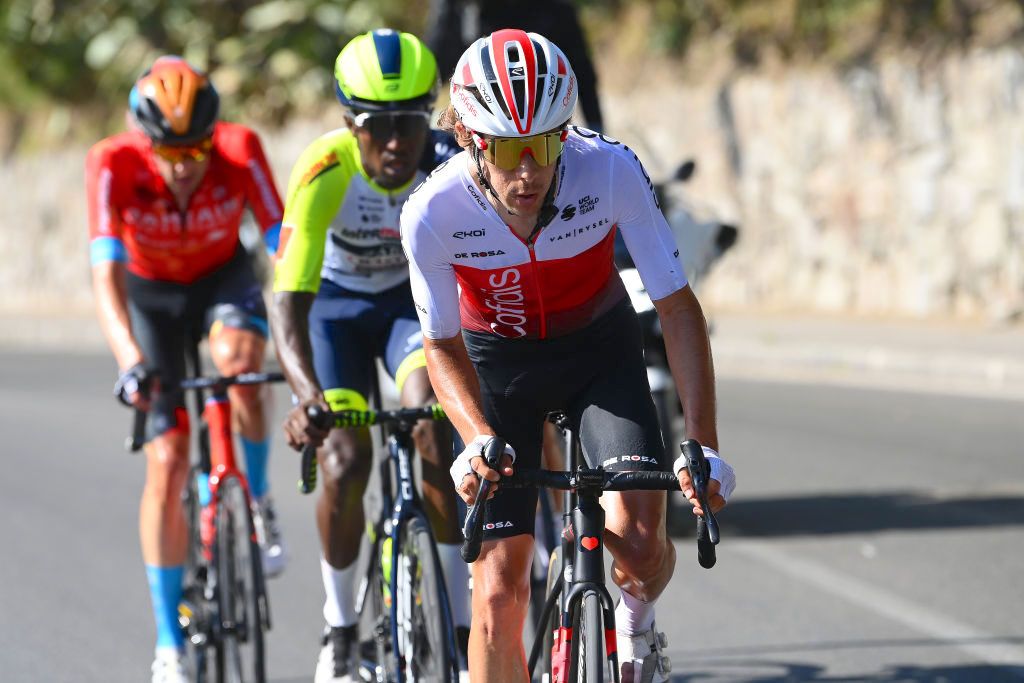 Guillaume Martin’s overall challenge at this Giro d’Italia looked to have been submerged on Mount Etna, but it sprouted once again in the shadow of a different volcano on stage 8. The Frenchman clawed back three minutes on the favourites by infiltrating the early break on Saturday’s short, intense stage around Naples, and now his Giro takes on a very different hue.

“I was very disappointed after the Etna stage. I had prepared a lot for that stage and then I lost time there,” said Martin after he wheeled to a halt on Via Caracciolo, Vesuvius shimmering in the haze across the bay. “Now underneath another volcano, I’ve gone a bit better.”

Although the Cofidis rider had to settle for ninth on the stage, 33 seconds down on winner Thomas De Gendt (Lotto Soudal), his efforts saw him leap 24 places to fourth overall at the Giro. He is now just 1:06 down on maglia rosa Juan Pedro López (Trek-Segafredo) and, more pertinently, he is 36 seconds ahead of Simon Yates (BikeExchange-Jayco), who had spent the entire opening week as the best-placed of the established overall contenders.

Like the desert flower growing on the arid slopes of Vesuvius in Giacomo Leopardi’s La Ginestra, Martin’s general classification bid blossomed again in a most unlikely place. The 153km stage in the hinterland of Naples included four laps of a sinuous circuit over the Monte di Prodica, and this miniature classic seemed to lend itself to explosive riders in the vein of Mathieu van der Poel (Alpecin-Fenix) or Biniam Girmay (Intermarché-Wanty-Gobert Matériaux) rather than a diesel like Martin.

Van der Poel and Girmay were duly aboard the 21-man break that formed in the opening kilometres as the race climbed towards Pozzuoli, but Martin’s presence in the move was rather more surprising. Indeed, the Cofidis rider confirmed that it had not even been considered beforehand. After the race left the start from Piazza del Plebiscito, he had been perched at the rear of the peloton throughout the neutralised zone.

“It wasn’t planned at all,” Martin said. “I think I was at the back of the peloton in kilometre zero and then I moved up when the road starting climbing. I had good legs today and I just followed a move, but it wasn’t planned. Once I was in front, I thought I needed to keep going.”

With an arduous leg to the Blockhaus coming on Sunday, the other general classification contenders were not tempted to go on the offensive in Naples, but Martin reckoned that it was impossible to avoid expending energy on a day as stressful and as sinuous as this. He stuck to his task at the head of the race.

“On a dangerous circuit like that, with all the corners, I didn’t think I was spending any more energy out front than I would have been doing behind, so I kept on going,” said Martin. “That said, I had to ride a lot in the wind in the finale, of course, so I certainly used up quite a bit of energy there.

“But it was more pleasant to be out in front like that than to be fighting for the wheels in the peloton. I enjoyed it, even though it was hard with riders like Van der Poel and Girmay.”

On the early circuits over the Monte di Procida, Martin confessed that he struggled with the ferocity of Van der Poel’s accelerations, but the pitch of the race was more to his liking as the laps went by. “I was on Van der Poel’s wheel the first time he attacked and soon he was 200m in front of me. It was impressive to watch,” Martin said. “My qualities are in endurance and in repeating efforts. As we did more and more climbs, I felt myself getting better in the group and that’s encouraging for what’s to come.”

Although Martin missed the four-man winning move that forged clear with 40km to go, he had the considerable consolation of his rise in the general classification. At one point, he was even on the cusp of becoming the virtual race leader, but López’s Trek-Segafredo squad did enough to ensure the Spaniard would enjoy at least one more day in the maglia rosa.

“In the finale, I heard I wasn’t far off the pink jersey but then they accelerated in the peloton. I didn’t really believe it would happen, because I saw that Trek were controlling things,” said Martin, though he has put himself in a position to inherit the jersey on Sunday.

Martin is mindful, of course, that his efforts on the Bay of Naples could exact a toll when the race reaches more rugged terrain in Abruzzo on Sunday. At last year’s Tour de France, after all, Martin moved up to second overall after getting in the break on the road to Quillan, only to drop back down to 9th when he faltered in Andorra the following day. So it goes.

“I’ve taken back a bit of time that I lost earlier on in the race, but I hope don’t lose double this time tomorrow,” Martin said. “But I’m an attacking rider who loves to race on the front. I prefer not to have regrets.”