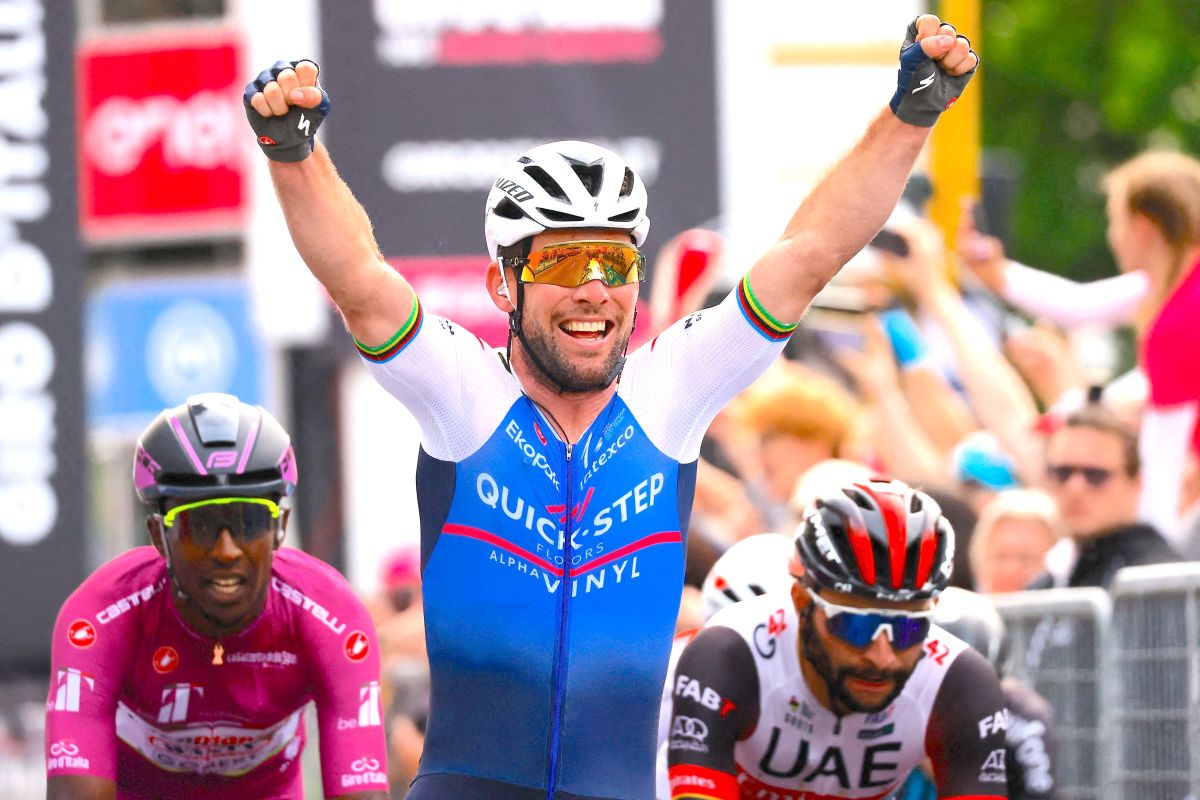 Nine years since his last appearance at the Giro d’Italia, Mark Cavendish (QuickStep-AlphaVinyl) notched up his 16th stage victory at the Italian Grand Tour with a commanding sprint on stage 3.

The Manxman, who was wearing a QuickStep jersey when he last rode the Giro in 2013, was given a perfect lead-out by Michael Mørkøv before finishing the job with a long-range sprint.

Despite hitting the front with some 300 metres still to run, Cavendish comfortably held off challenges from Arnaud Démare (Groupama-FDJ) and Fernando Gaviria (UAE Team Emirates) on his right and left shoulders, respectively, to celebrate on the shores on Lake Balaton.

Démare inched Gaviria to second place, while Biniam Girmay (Intermarché-Wanty-Gobert) found himself boxed in and had to settle for fourth.

Mathieu van der Poel (Alpecin-Fenix) retained the pink jersey as overall leader after switching to a support role. He looked to lead-out Jakub Mareczko but the Italian was slightly out of position and could only manage fifth place despite hitting the line with speed.

“It’s really nice,” said Cavendish. “We wanted to do good in this first sprint, we did, and I’m very happy.”

The 201km flat stage from Kaposvár to Balaton was largely a sleepy affair, with a three-man breakaway dangling in front of a relaxed peloton for the best part of five hours, but it came to life in the closing kilometres.

Alpecin-Fenix looked to take control on the left-hand side in the final 2km but QuickStep’s organisation and timing proved superior. Davide Ballerini led them through a roundabout to the flamme rouge before Bert Van Lerberghe took over. They were at risk of getting swamped on the left when Mørkøv hit the front and pulled Cavendish through the middle.

The 37-year-old then decided to open the taps with a full 300 metres remaining, getting out front and holding his line and speed all the way for what was a convincing victory. Démare and Gaviria jostled on either shoulder but never had the strength to get on terms, while Girmay was nestled in Cavendish’s slipstream but couldn’t plot a route out.

Mareczko finished fast but started from too far back, as he found himself a full two wheels back as Van der Poel was reaching full tilt in his own lead-out alongside Mørkøv.

“We’ve got half a team for the climbs half for the sprints, but everyone committed,” Cavendish said. “With Ballero, Van Lerberghe, and Morky, I’ve got an incredible final group there and they delivered today.

“Ballerini kept it to the roundabout then Van Lerberghe went, other teams came, but Morky stayed super cool. In the end I had to go long, I had to go with 300 to go. I just had to hold the side. I’m happy I could hang on for that long.”

The last time Cavendish raced the Giro, he finished the race with five stage wins. Will history repeat itself?

The final stage of the Hungarian Grande Partenza plotted a 201km route from Kaposvár over to Lake Balaton, tracking the shoreline and taking in the gentlest of fourth-category climbs before the flat finish.

There was little appetite for the breakaway, so three riders clipped clear with a minimum of fuss. In there were the pair who formed the two-man break on the opening day – Drone Hopper-Androni’s Mattia Bais and Filippo Tagliani – while Samuele Rivi (Eolo-Kometa) gave them a bit of company this time around.

They built a lead of more than five minutes but Alpecin-Fenix hit the front en masse and set about reducing it. There appeared to be a hint of wind as the race leader’s team took control and raised the pace from far out but the pace never really lit up and things soon settled right back down again.

In the first hour 39.5km were covered and the gap fell to 2:30 by the first intermediate sprint, where Bais led out Tagliani for full points as Rivi challenged but settled for second. The peloton followed and the sprinters were drawn out in search of ciclamino jersey points, with Gaviria and Démare the top finishers as Cavendish trailed much further back.

The race then entered a truly relaxed phase, with riders smiling to the cameras, chit-chatting, taking nature breaks, and leisurely putting away their lunches. The gap hovered around the two-minute mark as little of consequence occurred for some two hours.

The second intermediate sprint came with just over 50km to go, but this time did not count towards the ciclamino standings. Once again, Bais led out Tagliani, who collected maximum points for the intermediate sprints competition ahead of Rivi.

By that point, the gap was less than a minute, and when it dropped to 30 seconds, Rivi launched a surprise. Bais and Tagliani were deep in discussion when the Eolo rider sprang out and stole a march. Bais was drawn into instant riposte but Tagliani immediately fell away.

Rivi attacked again some 10km later, while Bais did the same 10km after that. Neither move came to any fruition and both just delayed the inevitable catch, but they at least provided some semblance of action. The breakaway finally came to an end with 28km to go, at which point teams were holding position but not really fighting for it.

The sole climb came with 13km to go but was only a short incline. Pascal Eenkhoorn (Jumbo-Visma), who’d tried to take the mountains jersey by saving himself for the late climb in Saturday’s time trial, used the grass to move up and attack, but he was followed by the rider who’d executed the same plan better than him the previous day: Rick Zabel (Israel-Premier Tech). Wearing blue, Zabel led out the dash for the top, but Eenkhoorn got there first and drew level on mountains points, although Zabel will remain in the blue jersey by virtue of his superior placing overall.

Eenkhoorn continued his effort over the top and led solo until 6km to go, by which point the sprint trains were assembled and were rubbish shoulders with the GC teams keeping their leaders out of position. Alpecin-Fenix punched through on the left and looked to take control but their sprinter was disengaged. UAE and FDJ looked to have their say but didn’t have the same numbers.

In the end, it was QuickStep who had all the ingredients, although in this case the lead-out was only as good as the sprint, with Cavendish’s 300-metre effort slotting in right towards the top of his greatest Giro hits.