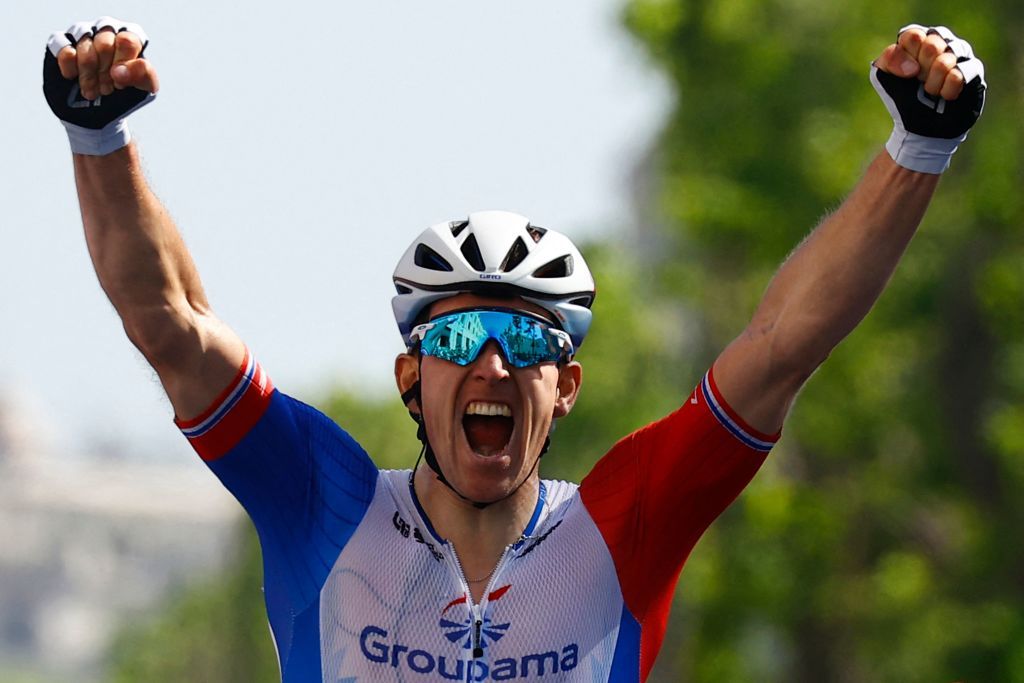 Arnaud Démare (Groupama-FDJ) won stage 5 of the Giro d’Italia, sprinting to his first victory of the season in Messina.

The Frenchman beat Fernando Gaviria (UAE Team Emirates) and Giacomo Nizzolo (Israel-Premier Tech) to the line after Mark Cavendish (QuickStep-AlphaVinyl) and Caleb Ewan (Lotto Soudal) were ridden out of contention on the day’s main climb.

Démare himself was dropped on that long, gentle climb with more than 100km remaining but limited the damage and managed to regain contact on the descent before sending his teammates to set up the finish.

Miles Scotson took such a good position through a tight-hand bend with 800m to go that he found himself off the front, but Ramon Sinkeldam – in the absence of usual last man Jacopo Guarnieri, dropped for good on the climb – was on hand to offer a long lead-out before Démare finished the job.

The Frenchman, who won four stages at the 2020 Giro and one in 2019, opened his sprint with 200 metres to go and comfortably held off Davide Ballerini on his right, who was sprinting as Cavendish’s replacement as one of only two riders spared from waiting for the Manxman on the climb. Gaviria hijacked Giacomo Nizzolo’s (Israel-Premier Tech) lead-out but couldn’t get on terms with Démare and bounced his bike in frustration, while Nizzolo himself eased through for the final podium spot ahead of Ballerini.

“I’m really happy. It’s the first win of the year for me. It’s been a difficult day. It was a brilliant sprint, the guys did a really good job. They launched the sprint perfectly,” Demare said.

“It was a difficult climb – I lost quite a bit of time, but we did a great job to get back on the descent. Everyone had to be strong to get back.”

Despite being the team that shelled out the two fastest sprinters on the mid-stage climb, Alpecin-Fenix weren’t able to put Mathieu van der Poel in contention. The Dutchman had been expected to sprint after Jakub Mareczko finished outside the time limit the previous afternoon but was badly positioned through the last corner and finished down in 78th place.

Biniam Girmay, whose Intermarché-Wanty-Gobert teammates had also been instrumental in keeping Cavendish and Ewan at bay following the climb, once again found himself without a clear run as he brushed up alongside Phil Bauhaus (Bahrain Victorious) and had to stall his sprint by the barriers, eventually coming through to take fifth ahead of the German.

Juan Pedro López (Trek-Segafredo) finished safely in the peloton to retain the pink jersey as overall leader, but there were no significant changes to the general classification. João Almeida (UAE Team Emirates) did, however, manage to find two seconds on his rivals at the second intermediate sprint, moving him up above Pello Bilbao (Bahrain Victorious) into seventh place, 16 seconds behind the ‘virtual’ leader among the pre-race favourites, Simon Yates (BikeExchange-Jayco).

The 174km stage started out from Catania and it wasn’t long before a breakaway formed. As in two of the three previous road stages, the Drone Hoper-Androni duo of Mattia Bais and Filippo Tagliani were in there, joined by Jaakko Hänninen (AG2R Citroën), Alessandro Tonelli (Bardiani-CSF), and Mirco Maestri (Eolo-Kometa).

They built a lead of 4:30 before the powers in the peloton decided to start controlling, with Trek-Segafredo rubbing shoulders with the sprint teams and taking their responsibility to protect the pink jersey. By the time they turned off the coast and headed inland towards the day’s climb, the gap was down to 3:30.

The road had already started to rise by the intermediate sprint at Francavilla di Sicilia after 55km, and it kept going for another 20km to the summit of Portella Mandrazzi. The climb had an average gradient of less than 5% and didn’t cause many problems at first.

However, seven kilometres from the top, Alpecin-Fenix suddenly hit the front en masse and upped the pace significantly. Despite the relatively gentle gradients, the damage was done almost instantly, with Ewan losing contact. A kilometre or so later, Cavendish was gone. Ewan found himself with one teammate before two more dropped back for him, while Cavendish was quickly surrounded by five riders. A few kilometres further up – three from the top – Alpecin’s forcing produced another split, with Démare among a group of 15 clipped off the back.

At the summit of Portella Mandrazzi, with 99.5km to race, Maestri skipped clear to grab maximum mountains points ahead of Bais and Hänninen. The peloton followed 50 seconds later, with blue jersey wearer Lennard Kämna (Bora-Hansgrohe) moving forward to collect the final point. The Démare group trailed the peloton by 1:10, while Cavendish’s QuickStep group crossed at 2:40. The situation was even more dire for Ewan, who was a further two minutes back.

The subsequent descent measured nearly 30km and was similarly gentle enough to require plenty of pedal-pushing, making life even tougher for those looking to chase back on. Alpecin-Fenix backed off but Girmay’s Intermarché-Wanty-Gobert teammates took over and ensured there was no real let-up. Still, Démare’s group managed to get back on towards the bottom, but the Cavendish group – which collected a few stragglers from other teams – couldn’t get down quickly enough.

By the time the road flattened out with 67km to go, the peloton was only 10 seconds behind the break, while Cavendish was 2:30 in arrears and Ewan at 4:30. Both chase groups continued their efforts on the flat, with two more Lotto riders dropping back to make it five riders with the Australian. Likewise, Cavendish’s five teammates continued to bury themselves.

However, there was no shortage of incentive up front. Intermarché had done the descent but Giacomo Nizzolo’s Israel-Premier Tech teammates then took over on the flat. Soon enough, Démare’s Groupama-FDJ teammates had recovered enough to get involved. The Cavendish deficit dipped under two minutes at one point but, outnumbered, they were forced to call off the chase with just under 40km to go.

The second intermediate sprint came with 35km to go, and carried bonus seconds of 3-2-1 for the first three, coaxing out some of the GC contenders. Kamna was the first to make a push, having risen to second overall from the breakaway on Tuesday, while João Almeida (UAE Team Emirates) was piloted up by Diego Ulissi and Romain Bardet (DSM) trailed behind. Ineos cleverly sent road captain Ben Swift up and he duly snaffled the maximum haul of three seconds away from team leader Richard Carapaz’s rivals, with Almeida taking the two seconds and Ulissi the final one.

With the Ewan and Cavendish groups coming together in collective defeat, it was a calmer and readier wind-up for the sprint finish in Messina. Groupama-FDJ did most of the work before the sprint and GC trains assembled for a more frantic run alongside the coast heading south towards the finish.

With 5km to go, Cofidis took it up before Bora then took command on a short incline with 3.5km to go. With 3km to go, Alpecin moved up on the left and hit the front with four in front of Van der Poel. Dries de Bondt swung right and was followed by a Trek-Segafredo line as Van der Poel and his other lead-out men hung back.

Romain Bardet then hit the front, DSM not sparing their GC leader from lead-out work. Cofidis and Israel had the front for a left-hand bend with 1.2km to go, leading towards a tight right-hander with 800m to go. Scotson took the best line through but it was so good he was disengaged from the rest of the FDJ train. Sinkeldam, with a long way to go and in a somewhat unfamiliar role, stayed calm and delivered Démare to his winning position.

The Giro d’Italia heads to the mainland for Thursday’s 192 kilometre stage from Palmi – at the tip of Italy’s boot – to Scalea, where the pure sprinters should have a chance at redemption on the mostly flat stage.