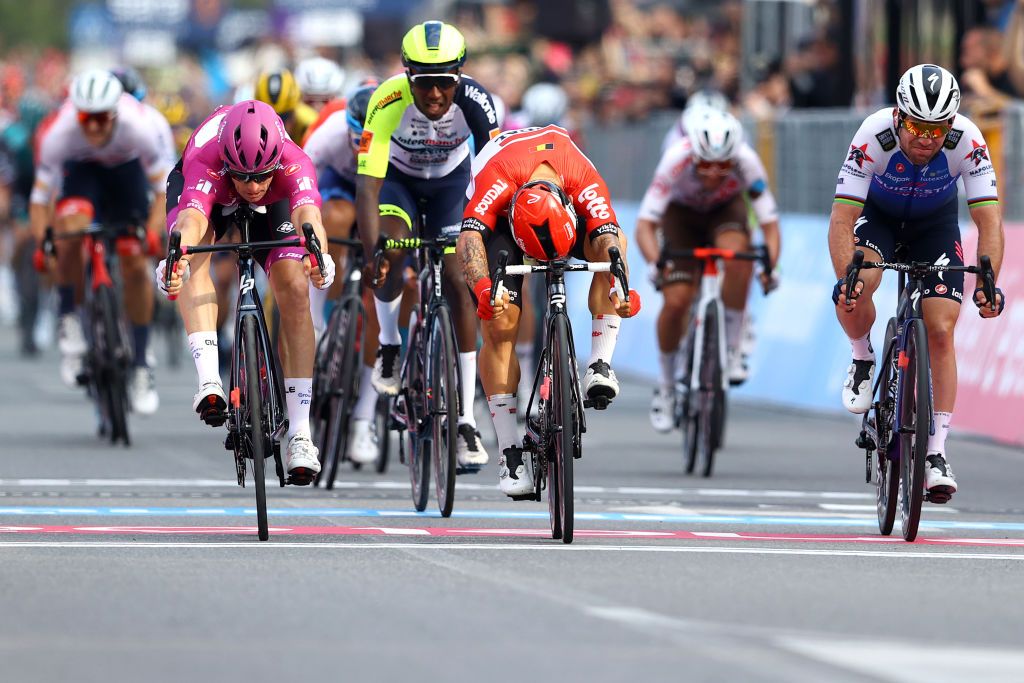 Arnaud Démare (Groupama-FDJ) sprinted to victory on stage 6 of the Giro d’Italia in Scalea, livening up what was a deathly dull five hours of racing with a photo finish on the line, millimetres ahead of Caleb Ewan (Lotto Soudal).

The Frenchman came from behind to beat the Australian and take his second win in two days after a strong lead-out by Jacopo Guarnieri, while Mark Cavendish (QuickStep-AlphaVinyl) rounded out the podium after launching his sprint just before his two rivals hit the wind.

“It was a really calm stage and everybody had fresh legs,” Démare said afterwards. “Yesterday it was a collective job and today we had everyone as well. At each roundabout we were perfectly placed.

“At around 500 metres, Jacopo did a great job and I got myself into the wheels. The sprint lasted about 100 metres and I managed to get there.

“I thought maybe it was me that was second until we saw the photo. I felt I needed to find a way out – I couldn’t go left, so I had to go right and had to go further around to the right because Ewan was there. I needed to get to the front and not make the mistake that Ewan made on the first day.

“It was right on the line. I felt like I was in front but you never know. I’m really happy. We knew it was going to be really close. I threw the bike and that was the difference.”

The final kilometre, which finally came around 35 minute slower than the slowest time schedule for the stage, saw Groupama-FDJ take over at the head of the peloton as the QuickStep-AlphaVinyl train was derailed by Cofidis.

The French squad set things up perfectly on the final run-in before Michael Mørkøv got back to the front just in time with Cavendish on his wheel and Ewan right behind.

It was the Manxman who launched first, going early once again with 250 metres left to run. Unlike his stage win in Hungary, however, he jumped too soon. Ewan and Démare had lined up behind him as the trio of fast men sped into the final 150 metres, with Ewan first of the pair to hit the wind.

Ewan headed to the line looking like he would hang on to claim his sixth career Giro d’Italia stage victory, but the maglia ciclamino-clad Démare had just enough in the dying metres, winning the stage by the finest of margins with a bike throw to edge himself past.

The stage, more notable for a lack of interesting events than anything else, failed to provide any shake-ups in any of the major classifications.

Juan Pedro López (Trek-Segafredo) remains in the pink jersey, 38 seconds up on Lennard Kämna (Bora-Hansgrohe), who still holds a healthy mountain classification lead. Démare, meanwhile, has only extended his points jersey total with another stage win.

The sixth stage of the Giro d’Italia took the riders 192km up the Tyrrhenian coast in Calabria on what would certainly be another day for the sprinters. Like stage 5, which finished in Messina, there was little along the way to dissuade the fast men, save for a fourth-category climb.

The climb to the Aeroporto Luigi Razza came right at the start of the day, though, and wouldn’t trouble the likes of Mark Cavendish and Caleb Ewan as Portella Mandrazzi had on Wednesday. What followed was a largely flat run on the coastal road north, ahead of the finish in Scalea.

It was a very quiet start to the stage, with no riders heading out on the attack as the flag was dropped in Palmi to kick things off.

The most notable thing about those quiet early kilometres was a joke attack from Pascal Eenkhoorn (Jumbo-Visma) and Bauke Mollema (Trek-Segafredo), the Dutch pair surprisingly sprinting away from the massed peloton before easing up and laughing at one another.

In the peloton, the pace was an extremely leisurely 35kph, some way short of the slowest schedule for the day, which predicted a low average speed of 42kph. It wasn’t until the 23km mark, partway up the hill which led to the KOM, that a real attack went.

Eolo-Kometa rider Diego Rosa was the man in question. Yes, just one man. The Italian jumped away solo and nobody in the peloton had any interest in joining him in the move. Back in the peloton – four minutes back at the top of the climb – Lotto Soudal controlled the situation.

Rosa took the points on the climb and the points at the day’s first intermediate sprint in Vibo Valentia, the latter provoking a three-man attack from Drone Hooper-Androni Giocattoli.

14km after the sprint, the Androni trio dropped back to the peloton, leaving Rosa to slog away on his own with 140km still to run before the finish, not that he’d make it there alone, of course.

Groupama-FDJ joined Lotto Soudal on the front in limiting Rosa’s advantage to four minutes, but to be frank there was very little of note going on for much of the stage. Heading towards the cluster of small hills from 70km to 20km to go, the peloton did eat away at the gap somewhat, though.

From 3:45 at the start of the uncategorised lumps, the bunch shaved time off as they slowly edged towards the line. By the time Rosa was inside the final 40km, he was just a minute up, and his time out front was numbered.

It was all over for the 33-year-old at the 28.5km to go mark, the Lotto Soudal- and QuickStep-AlphaVinyl-led peloton sweeping him up early and well in time for the finish. The Belgian squads led the way across the 20km mark around half an hour down on the slowest time schedule, indicative of how sheerly boring the day’s racing was.

The pace finally upped heading into the final 15km, when the Belgian squads, UAE Team Emirates, and Groupama-FDJ were among the teams in control at the front hoping to set up their sprinters.

More teams joined the fray as the peloton sped into the final 5km, with sprint squads mixing among GC teams keeping their leaders out of trouble. QuickStep-AlphaVinyl and Groupama-FDJ were the most organised trains on the front, while Ewan stuck to Cavendish’s wheel heading into the final 3km.

Interlopers in the form of Intermarché-Wanty-Gobert (setting up Girmay), and Israel-Premier Tech (setting up Giacomo Nizzolo) took over heading into the final 2km, though in the end, the pair would round off the top five behind the podium trio.

What was more perplexing was the total absence of Alpecin-Fenix towards the front at any point in the proceedings, the Belgian squad not contesting the sprint at all. Instead, it was Groupama-FDJ who retook the mantle in the final kilometre, eventually delivering Démare to a seventh Giro d’Italia stage victory of his career.