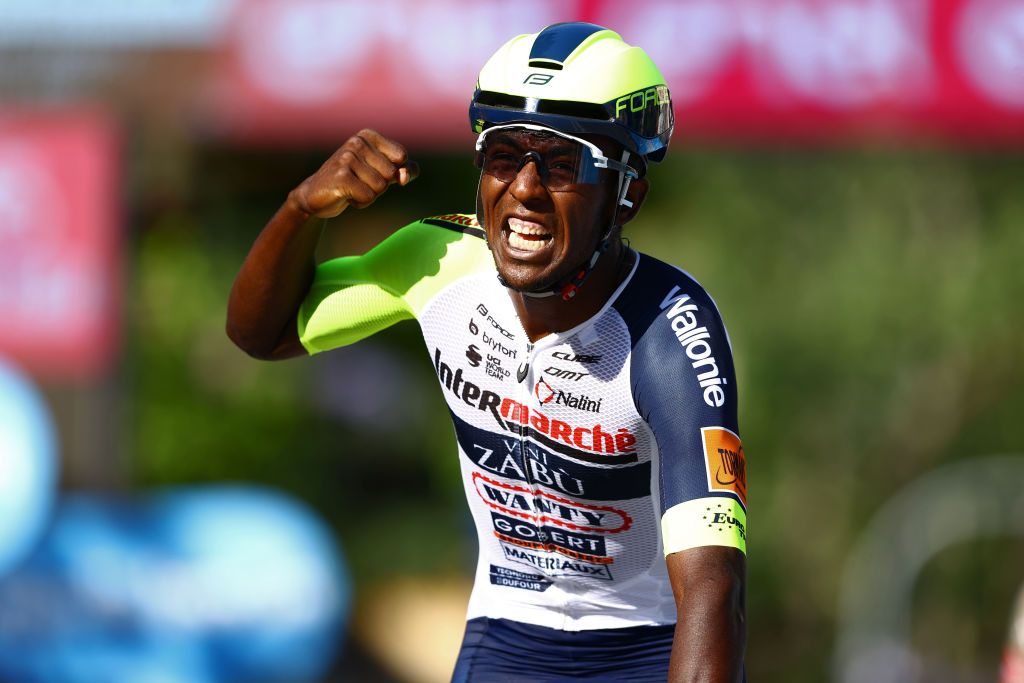 Biniam Girmay (Intermarché-Wanty-Gobert Matériaux) claimed the first Grand Tour stage victory of his career – and the first in history for an Eritrean – as he put Mathieu van der Poel (Alpecin-Fenix) to the sword on stage 10 of the Giro d’Italia.

Having missed out to the Dutchman on the opening stage, before claiming four more top-five placings, Girmay finally bagged his win on a hilly day to Jesi that saw the pure sprinters dumped out of contention.

Van der Poel emerged from Girmay’s slipstream in the final 100 metres but was unable to get around and was left to sit up and give a sporting thumps-up as he crossed the line.

Vincenzo Albanese (Eolo-Kometa) claimed the final spot on the podium as a group of around 40 riders reached the finish in the lead group, including the general classification favourites and overall leader Juan Pedro Lopez (Trek-Segafredo).

And yet, despite the individual headlines, he took the spotlight and shone it on his teammates. “I don’t have the words for what my team did today,” he said.

Intermarché-Wanty-Gobert Matériaux placed four riders into the 40-man move that emerged over the last of three category 4 climbs in a hilly final half of the stage, and they helped keep a lid on attacks, notably from Van der Poel. The Dutchman’s teammates had helped shred the peloton on the climb, dropping the last of the pure sprinters in Arnaud Démare (Groupama FDJ), but he found himself alone on the other side and resorted to repeated accelerations on the descent in the final 6km.

Girmay, despite nearly taking a wrong turn at a questionably-signalled corner, was able to play it cooler in the reduced bunch, and when it came to the final kilometre, he found a lead out in the most unlikely of places: the diminutive Domenico Pozzovivo. It was in fact Van der Poel who positioned himself on the Italian’s wheel but Girmay stole a march with an early jump along the barriers. Van der Poel soon hit out and wrestled his way alongside. In an agonising effort, he only managed to draw his head level with Girmay’s shoulder, before being forced to relent.

Girmay never faded, sailing clear and waving his arms in wild celebration across the line.

“It’s unbelievable,” he said. “All the team was pulling – even GC riders. In the end Pozzovivo was amazing. He just said to me ‘come’ in the last 600 metres, and did a really good lead-out. Every day comes new history. I’m really grateful and happy about what I did.”

There were no changes at the top of the general classification as all the overall contenders finished safely in the lead group. However, there were some skirmishes. Richard Carapaz once again showed his attacking instincts, with his Ineos Grenadiers teammates setting a strong tempo on the final climb in the last 10km, before the Ecuadorian launched an attack of his own on the descent with 3.7km to go. Mikel Landa and Romain Bardet were swiftly on the case and it fizzled out, while Hugh Carthy launched his own move before things came back for the final kilometre.