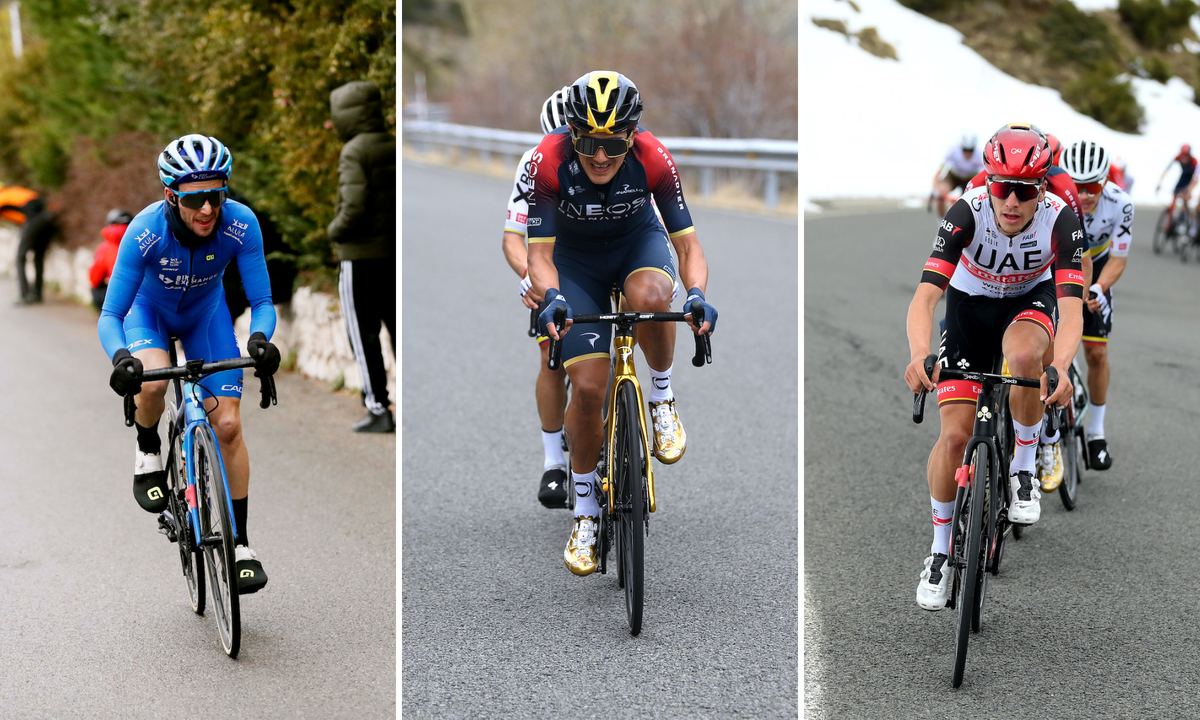 There was a time when Ineos Grenadiers simply couldn’t get the Giro d’Italia right, but since claiming their first pink jersey with Chris Froome in 2018, they’ve gone on to win it again twice more.

They are therefore the team we first look to for overall contenders, and in Richard Carapaz they have the rider who on paper looks best equipped to win this year’s race. He’s one of just three genuine contenders to have already won a Grand Tour, and of those riders has the best record in recent Grand Tours, having placed on the podium another two times since 2019.

The fact that all the riders who beat him on those occasions are all absent means there’s nobody here he should be overly afraid of, while his ride at the recent Volta a Catalunya, where he placed second overall and won a stage from a sublime long-range breakaway, suggests he’s arriving into the Giro in top form.

As ever with Simon Yates (BikeExchange-Jayco), there’s no doubting his ability to cause carnage on a climb. There are few who can match his uphill accelerations, as was the case at Paris-Nice earlier this year, where he won the final stage with a powerful solo attack en route to finishing second overall.

There’s also no doubting his form, following two stage wins at the Vuelta a Asturias just days ago. Instead, the big test for Yates is whether he can ride consistently enough throughout the three weeks to win a career-first pink jersey, and avoid the bad days that have blighted him here in the past.

Such is his consistency in every stage race he participates in, it’s difficult to imagine João Almeida (UAE Team Emirates) not being once again in the fight for a podium spot. The Portuguese rider followed-up his fourth overall and long spell in pink on debut in 2020 with sixth overall last year, and will this time enjoy the benefit of being his team’s undisputed leader having shared duties with Remco Evenepoel at Quick-Step last year.

A year older and a year wiser, the 23-year-old might have been the overall favourite had more time trialling featured in the route, but his climbing alone is enough to make him a top contender.

Whether it’s a bad day, a race-ending crash, or very public fallout with his team, something always seems to go wrong for Miguel Angel Lopez (Astana Qazaqstan) at Grand Tours. Yet on his day he remains one of the most devastatingly explosive climbers, and has the talent to rip the race to pieces on the hardest mountains.

One of his undoings has always been his weakness against the clock, which should be less of a problem this year given the lack of time trialling kilometres. If can produce the kind of performances as the one that saw him catch Thibaut Pinot late on to win a mountain top finish at the recent Tour of the Alps on a regular basis, then a first ever Grand Tour title is not beyond him.

Was last year a blip in the career of Mikel Landa, or the start of a longer-term decline? For the first time since 2016 he failed to make the top seven in a Grand Tour, crashing out of the Giro and abandoning the Vuelta a España with no form as a younger crop of riders stole the limelight instead.

Aged 32, Landa shouldn’t yet be too old to have passed his best, and there have been glimpses of good form this year, most notably his podium finish at Tirreno-Adriatico. But he’ll need to assert himself early on, as otherwise he may find himself riding in support of Bahrain-Victorious team-mate Pello Bilbao should the Spaniard carry on the form that saw him place in the top overall and win stages at the recent Tour of the Alps and Itzulia Basque Country.

On the sole basis of recent past Grand Tour finishes, Wilco Kelderman (Bora-Hansgrohe) would be considered among the very top favourites. The Dutch rider may often go under the radar, but he’s made the top five in half of his last six Grand Tour appearances, including a podium finish at the 2020 Giro d’Italia which could, were it not for a couple of bad days in the final week, have been an overall victory. There are doubts however about his form, having yet to feature in the GC contest of any race yet this season.

He’ll be reunited with Jai Hindley, the former Sunweb team-mate he shared the podium with that year, at Bora-Hansgrohe for this year’s edition, as well as Emanuel Buchmann, who is still hoping to rediscover the form that saw him place fourth at the Tour de France three years ago. Any one of these riders could end up mounting a GC challenge, but Kelderman is the most reliable of their options, if he can discover his form in time.

Just when Romain Bardet (DSM) was falling out of the conversation of possible GC contenders, he went and won the Tour of the Alps, one of the key preparation races ahead of the Giro. For a rider who so regularly is in the mix at the top of GC but only very rarely wins, that result felt especially significant.

A career renaissance of sorts had already appeared under way at last year’s Giro, where he placed seventh overall, his highest finish at a Grand Tour for three years. He’s also another rider who will benefit from the lack of time trialling, but a top five rather than a podium finish still feels more realistic.

Having placed eighth last year and 11th in 2019, as well as ninth at the Tour of the Alps a few weeks ago, Hugh Carthy (EF Education-EasyPost) certainly seems a good shout for a top-10 on GC.

But could, and should, Carthy be aiming for better than that? His podium finish at the 2020 Vuelta a España raised expectations to a degree that his performances since then have felt disappointing, with only one other top-five placing at a stage race (fifth at the 2021 Tour of the Alps), and one stage win at the 2021 Vuelta a Burgos. He’ll surely be eager to prove that that Vuelta ride wasn’t a fluke.

Given how sorely he was missed during his time out from cycling last year, and how great an ambassador for the sport he has been, the whole cycling world will surely be willing Tom Dumoulin (Jumbo-Visma) to find his best legs again at this Giro.

However, mounting a GC challenge and adding a second Giro title to his palmares following his 2017 overall victory is a huge ask for the Dutchman, especially considering how this climber-friendly route plays against his strengths. Even a return to the top ten on GC would be a significant accomplishment — or, alternatively, a support role for his 24-year-old team-mate Tobias Foss, who’ll be looking to improve upon his ninth-place finish from last year.