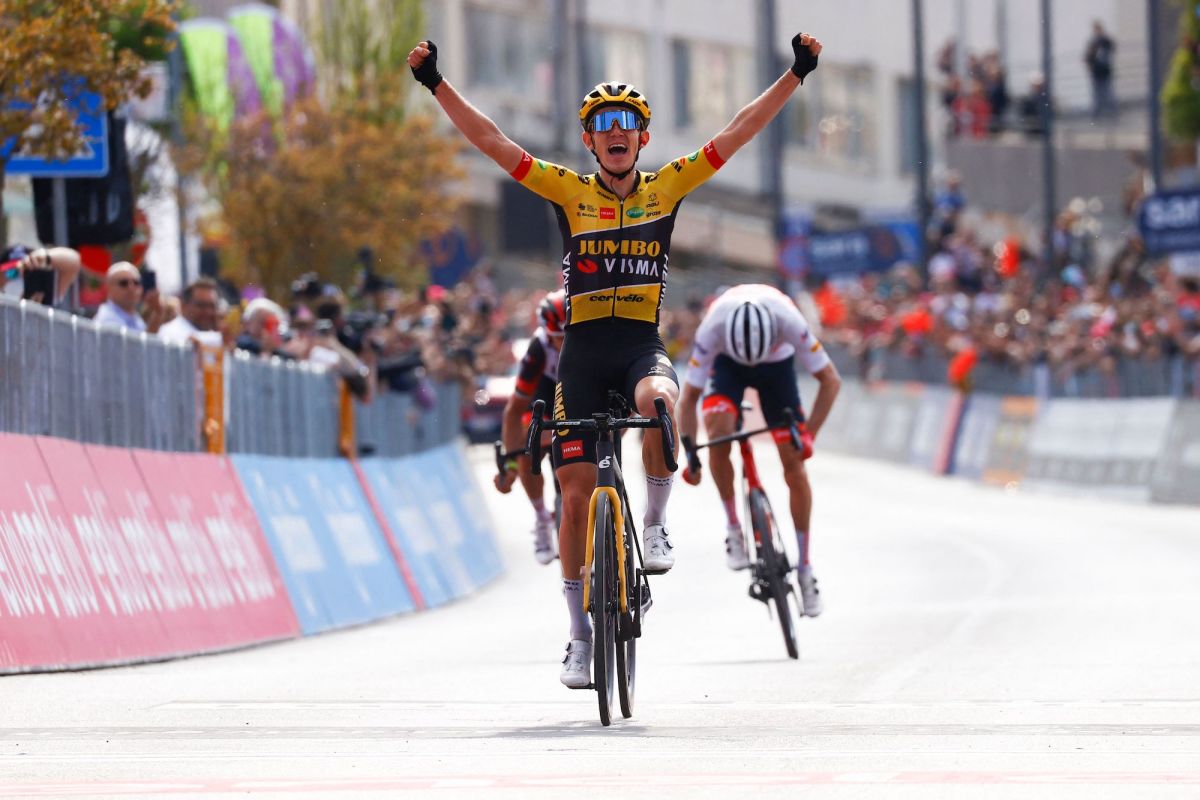 Koen Bouwman (Jumbo-Visma) might have been the winner on Friday, but Tom Dumoulin (also Jumbo-Visma) will be feeling almost as good as his countryman for the way he performed on stage seven of the Giro d’Italia.

After Tuesday’s stage to Mount Etna, it looked like Jumbo-Visma’s race was over already, with Dumoulin dropping out of general classification contention, and his teammates Tobias Foss and Sam Oomen also losing time. However, the Dutch team were able to quickly refocus and restructure their plan.

To be able to send Bouwman and Dumoulin up the road on a stage as hard as Friday’s was a masterstroke, and the pair dovetailed to perfection to neuter the threats of Bauke Mollema (Trek-Segafredo) and Davide Formolo (UAE-Team Emirates). They were both fully committed to the stage win, and it will surely give the team a lot of confidence.

Maybe they were never really away – but the narrative of this Giro already appeared set that Jumbo had been disappointing. So to turn around this so quickly is seriously impressive. Things can only get better.

Lennard Kämna (Bora-Hansgrohe) has already got a stage win in this Giro d’Italia, and has spent time in the blue jersey of the mountains competition. Yet it is clear that he has designs on a bigger objective, the maglia rosa.

He trails race leader Juan Pedro López (Trek-Segafredo) by just 38 seconds, and is in such good form that one can see him claiming the race lead over the next couple of days, although it is unlikely that he is a true general classification contender. On Friday, he even attempted an early attack, with 154km to go, to try and put his rival under pressure.

It did not work, but it is clear he has the legs, and the desire, for the pink jersey. At the end of the day he was at it again, sprinting up the final incline to the line in an attempt to grab any time whatsoever over López. Sadly for the German, it did not work, but expect this trend to continue over this climbing-heavy weekend.

Meanwhile, three of his teammates, Wilco Kelderman, Jai Hindley, and Emmanuel Buchmann, all sit within a minute of Simon Yates (Team BikeExchange-Jayco), the first true contender on general classification, so Bora are in a good position at the Giro.

If you’ve spent any time at all on the internet over the last few months, you’ve probably come across Francis Bourgeois, the man who makes truly frightening TikToks about him being a massive train nerd. I remain convinced he’s a fake, but that’s not a discussion for Cycling Weekly.

Ineos Grenadiers appear to like trains more than the train guy, returning to their favourite mountain tactic without achieving much yet again on stage seven. It first resurfaced as plan on Mount Etna on stage four, and was back with a vengeance on Friday.

Why they were riding so hard on the front of the peloton was unclear, given that there was no one up the road that was a particular threat to GC. Sure, Dumoulin was in the break, but he began the day over six minutes behind Richard Carapaz (Ineos Grenadiers). Sudden usurper he was not.

It seems like muscle memory for the British squad, with the Bens, Swift and Tulett, pulling on the front for much of the big climbs, and then Pavel Sivakov leading in Richie Porte and Carapaz into the finish. It just looks out of place, especially when they’re not even controlling the pink jersey yet.

Carapaz did attempt a wild attack, along with teammate Jhonatan Narváez and Mathieu van der Poel (Alpecin-Fenix) with 139km to go, but this was it in terms of aggression from Ineos, it was followed by a resolute defence that Geoffrey Boycott would be proud of.

Just like on stage six, the breakaway took a long old time to form, although for different reasons this time. On Thursday, no one wanted to bother, as everyone knew any attack would be completely futile and brought back well before the finish.

On Friday, however, it was common knowledge that a break would have a good chance of making it to Potenza alone. This meant there was an enormous fight to try and get in that crucial move. The first to make it stick was Wout Poels (Bahrain-Victorious) who tried repeatedly in the opening kilometres before finally getting it right almost 40km into the day.

At one point, Carapaz and Van der Poel were up the road, while at another Kämna was attempting something, but it all came to nothing. The man who was second on the stage, Mollema, didn’t attack from the peloton until 30km after Poels had first gone, showing how long the battle for the break went on for.

In the end, Poels paid for his repeated aggression, being dropped from the break and swallowed by the peloton. But the stage result showed that all those riders were right to try and attack, as the first five men across the line were from the day’s escape.

Stage seven saw the riders tackle 4730 metres of climbing, an enormous test after Thursday’s sleepy stage. However, the general classification contenders largely kept things quiet. They all know that there are even bigger tests to come.

There were no changes in the overall top 15, as those in the reduced peloton decided to wait. After the two sprint stages, it meant that there hasn’t been much of a revolution in the standings since Etna on stage four.

This will all change over the next couple of days, surely, as first the race tackles an arduous course around Naples on Saturday – primed for incident – before the biggest climbing test to Blockhaus on Sunday’s stage nine.

There are 5,080 metres of vertical gain that day, and the course finishes up on a category one climb. That might well be the day we see a GC revolution.