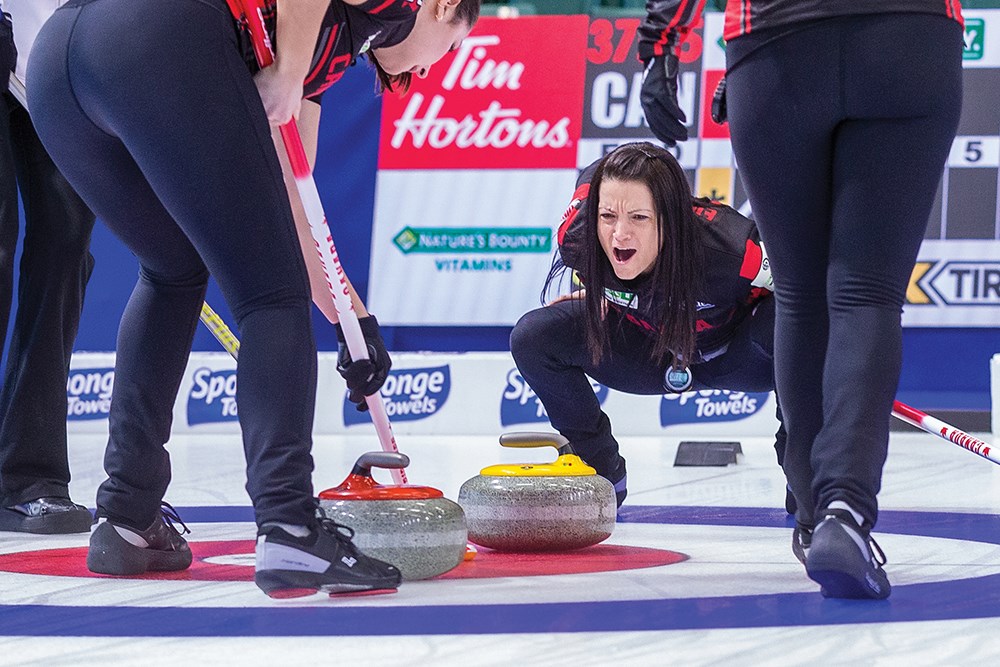 Kerri Einarson heard the cheers and cowbells as she hit the ice Saturday at CN Centre to face Italy in her first game at the 2022 BKT Tires OK Tire World Women’s Curling Championship and it sent chills down her spine.

Denied that perk as the hometown favourite last year in Calgary, when fans were forbidden because of the pandemic lockdown and the teams played in virtual silence in their athletic bubble, she missed that electric atmosphere dearly.

The 34-year-old Team Canada skip and her team – third Val Sweeting, second Shannon Birchard and lead Brianne Meilleur – rewarded their fans Saturday afternoon with a dominant 9-2 victory over the Italians in six ends.

“It was amazing, I stepped onto the ice and just instantly got goosebumps,” said Einarson. “And my family, I looked up and they’re right behind us. It’s an absolute honour to play in front of fans again and we’re going to embrace every single moment of it.

“It’s definitely a dream come true, being the home country, it’s pretty special and we thank all our family and friends and the fans that have come out, we really appreciate it.”

The pro-Canada crowd in the stands let Team Canada know they liked what they saw, with every scintillating shot they made, and that love from the fans wasn’t lost on Einarson. Team Canada picked up where it left off a month ago with a third-straight Scotties national title and played a virtually flawless opening game.

“It definitely feels weird, we haven’t heard that in a long time, so getting that and feeding off that is something we’ve missed,” said Einarson.

The four Canadian women, representing Gimli Curling Club in Manitoba, were statistically at the top in their shot-making at every position while reeling off an 11-1 record at the Scotties in Thunder Bay and it showed in their world tournament opener.

Canada kicked of the 12-game round-robin looking extremely sharp. Einarson stole two in the first end to put the early pressure on the Italians right away, then added three more in the second to raise the team’s comfort level even more.

“I had a real good feel for draw weight out there,” said Einarson. “We really controlled the front and got our rocks in some really great spots and put some pressure on them.”

Italian skip Stefania Constantini, making her third world championship appearance, struggled to find her draw weight and finally made a shot that counted in the third end to out up one on the scoreboard. A month ago in Beijing, the 22-year-old teamed up with Amos Mosaner to win Olympic gold in mixed doubles, going undefeated at 11-0.

But she didn’t have to contend with Einarson and her crew. With her front end setting the table so effectively, Einarson went right back to the attack in the fourth end and scored two more.

In the fifth, Constantini’s tap was not enough to dislodge Canada, which was left sitting two. Einarson put up another guard to protect the in-turn side and make it even more difficult for the Italians and Constantini ended up short with her draw attempt, resulting in another steal of two for Canada.

“It’s very wonderful ice but it’s very different from our ice in Italy so we have to keep working to communicate and keep improving,” said Constantini. “Canada plays a really good game. They are so strong and we have to work and try to improve for the next game.”

Constantini was at the helm of the Italian team at the 2021 world’s in Calgary, Constantini  and her team – third Marta Lo Deserto, second Angela Romel, and lead Guilia Zardinii (now the alternate to lead Veronica Zappone) finished 2-11.

Italy scored one more in the sixth but knew there was no way back and reached out to the Canadians with fist-taps as they left the ice.

Sweeting was in Prince George two years ago when the rug was suddenly pulled out from under the curlers when the pandemic first hit the country and the world event was cancelled just two days before it was to begin. After two years of waiting to get back to the ice at CN Centre, they were ready from the opening shot.

“It’s so special,” said Sweeting. “When you think something is going to happen a couple years ago and it doesn’t… it’s an incredible feeling to be representing Canada and especially to be the team here. We’re so thrilled and it definitely boosted us out there, we love the fan support.”

The Canadians practiced on the arena ice Friday and coach Reid Carruthers had them making shots they’ll need to make to dislodge the favourites, Sweden, Korea and the defending-champs from Switzerland.

“We felt pretty good out there, the speed was really good, I thought Kerri caught on to the ice really well and had the broom in the right spot and the girls were just setting up the ends really well,” said Sweeting. “It was a good start.”

At the 2021 world event, Einarson got off to a 1-5 start and recovered to finish at 7-7. That rough start taught her and her teammates a valuable lesson that’s shaped their approach to the week the second time around in Prince George.

“Don’t put so much pressure on yourself, I know you’re Team Canada but we’re also still Team Einarson, so just go out there and have some fun,” said Einarson. “We had never experienced that before and last year there were no fans to help pump us up and we just grinded the whole way. So this is definitely a brand-new experience.”

Canada is back on the ice tonight at 7 p.m. to face Norway. Also in the evening draw, Denmark faces Germany, Scotland takes on Switzerland and Japan opens against Turkey.