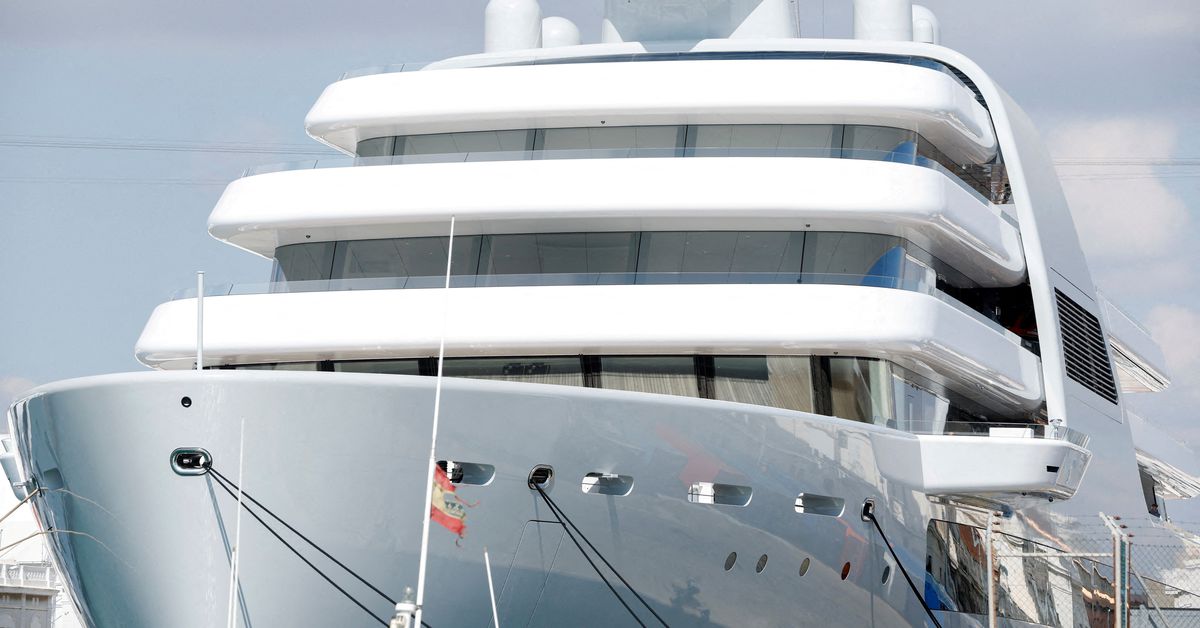 March 10 (Reuters) – What we know about Russia’s oligarchs and their assets:

Alisher Usmanov, 68, metals and telecoms tycoon with an estimated $16.2 billion net worth has been sanctioned by the United States and European Union

– A villa in Golfo del Pevero, on the island of Sardinia, worth approximately $19 million was seized by Italian authorities. read more

– The $600 million Dilbar superyacht is sitting in a Hamburg shipyard with authorities saying they have no plans to deliver it to the owner.

– Usmanov gave up his presidency of the Fédération Internationale d’Escrime, fencing’s highest body, and said he would no longer play a role in the organisation.

– A Bombardier jet linked to Usmanov is one of a number of Russian planes reportedly stranded at the EuroPort airport, in the French Alsace, by Swiss airspace closures. read more

– An Airbus A340 Prestige jet linked to Usmanov flew out of Munich, Germany to Tashkent, Uzbekistan on Feb. 28 and hasn’t been tracked since, according to Radar Box data.

– The U.S. treasury, while blocking Usmanov’s personal assets, has left companies controlled by him off their list of sanctions in an effort not to raise the price of commodities. read more

Roman Abramovich, 55, billionaire politician dubbed ‘Putin’s banker’ with an estimated $12.3 billion fortune is not on any sanctions list

– Abramovich announced Chelsea Football Club was for sale and he would donate the proceeds to victims of the Ukraine war.

– British MP Chris Bryant has said Abramovich is trying to sell his 15-bedroom mansion in Kensington Palace Gardens to avoid sanctions. He bought the home in the area of London nicknamed “Billionaire’s row” for 90 million pounds ($119 million) in 2011.

– An aircraft linked to Abramovich is at Europort Airport, unable to leave due to Swiss airspace restrictions. read more

– New York property records show a trio of Upper East Side properties worth $92.3 million are tied to his ex-wife Dasha Zhukova, a New York real estate developer married to shipping heir Stavros Niarchos. She is also building the 21-story Ray Harlem, which will house the National Black Theater, according to her website.

– The $600 million Solaris yacht linked to Abramovich left the Barcelona shipyard where it had been undergoing repairs on Tuesday, March 8. L2N2VC0HH

– A Boeing 787-8 linked to Abramovich flew from Moscow to Dubai on March 4, according to Radarbox data.

Oleg Deripaska, 54, industrialist who founded aluminium giant Rusal was sanctioned by the United States in 2018

– FBI agents raided a historic New York townhouse at 12 Gay Street, in Greenwich Village, and a Washington D.C. mansion connected to Deripaska in October. The tycoon responded on social media by saying nobody was living in those properties.

– “I have to ask: how much of Putin’s money was found in those abandoned houses yesterday?” he said, sarcastically inquiring whether investigators had discovered any mouldy jam or vodka in the cupboards. read more

– Through an LLC in the British Virgin Islands, Deripaska also owns a townhouse on 11 E. 64th Street, which he bought for $42.5 million in 2008, according to New York court records.

– These properties have not been seized by the government, despite sanctions that prevent him from doing business or owning property in the United States.

– U.S. sanctions were lifted against Rusal and its parent company En+ in 2019 when Deripaska reduced his stakes below a majority threshold to 44.95%. There are still concerns, however, that the Russian oligarch is pulling the strings of his business empire behind the scenes.

– Deripaska’s $65 million yacht Clio is one of several vessels owned by billionaires anchored in the Maldives, which does not have an extradition treaty with the U.S., according to shipping database MarineTraffic.

Vladimir Potanin, 61, the CEO of Norilsk Nickel with an estimated net worth of $22 billion has not been sanctioned by the EU or United States.

– The Guggenheim Museum said Potanin was stepping down as one of its trustees last week. He had held the position since 2002, acting as a major benefactor and sponsoring shows, including a Kandinsky show currently in New York.

– The billionaire’s 88-metre (290-foot) yacht Nirvana sailed to the Maldives, which has no extradition treaty with the United States, according to MarineTraffic.

– Potanin is estimated to have lost nearly a quarter of his wealth since sanctions impacted the ruble and the Russian economy, according to Bloomberg.

Igor Sechin, 61, CEO of Rosneft viewed as one of the most powerful people in Russia, has been sanctioned by the United States, EU and Britain.

Alexey Mordashov, 56, a son of mill worker who became a steel magnate with estimated net worth of $29.1 billion is on an EU sanctions list

– Mordashov shifted his holdings in travel and tourism group TUI after sanctions were imposed on him, Bloomberg reported.

– A UK filing showed the steel tycoon had shifted a $1.1 billion stake in mining company Nordgold to his wife Marina, according to Bloomberg.

Eugene Shvidler, 57, business associate of Roman Abramovich with estimated net worth of $1.7 billion

– Britain impounded a private jet it said was linked to Shvidler at Farnborough airport under new aviation sanctions that give it authority to detain any Russian aircraft. L2N2VC0DV

Vladimir Soloviev, 58, pro-Putin Russian TV host who is on the EU sanction list

– Two properties in Lake Como worth 8 million euros belonging to Soloviev were seized by Italian authorities.

Gennady Timchenko, 69, chairman of the Russian national hockey league with stakes in oil and gas companies has been sanctioned by the United States and EU

Petr Aven, oil investor who built a European business empire with an estimated net worth of $4.7 billion is on an EU sanctions list

– Aven’s stake in his LetterOne Investment company, with holdings in Spain’s Dia supermaket chain and a German energy group, was frozen following the EU’s sanctions. L5N2VA4XA

– Latvia’s government is looking to revoke his citizenship, despite having announced plans to open a museum there a week before the war in Ukraine started, the FT reported.

– Stepped down as trustee at the Royal Academy of the Arts in London. The arts organisation said it would return his donation toward its current Fancis Bacon exhibition.

Mikhail Fridman, Aven’s partner at LetterOne with an estimated net worth of $12.3 billion are on EU sanctions list

– Withdrew from the LetterOne investment firm he confounded L5N2VA4XA

– Pamplona Capital management said it had began disentangling itself from LetterOne. Other banks told the FT they are also reviewing their lending relationships.

– Fridman’s north London home, which he bought for 65 million pounds ($86 million) in 2016, is not believed to have been frozen as he is not subject to UK sanctions, according to multiple media reports.

Alexander Abramov, cofounder and chairman of Russian steel producer Evraz, with an estimated net worth of $5.9 billion is not sanctioned

– Abramov’s yacht The Titan arrived in the Maldives last week, according to MarineTraffic