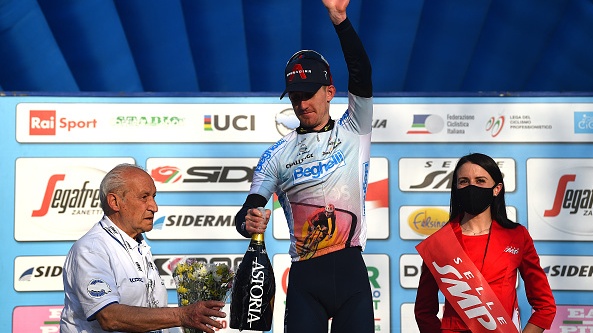 Eddie Dunbar has secured the biggest victory of his professional career on Saturday, winning the overall classification of the Settimana Internazionale Coppi e Bartali in Italy.

The Corkman sealed victory in the prestigious early-season stage race when he finished safely alongside his main rivals on the hilly final stage to Cantagrillo, placing 15th.

They were four minutes and 23 seconds behind QuickStep Alpha Vinyl teammates Josef Cerny and Rémi Cavagna, who were the best of a 10 man breakaway group which went clear earlier in the stage. The riders in the escape were no real threat to Dunbar’s lead and so his Ineos Grenadiers team concentrated on watching his rivals and ensuring he brought home the final overall victory.

There was no change to the time gaps at the top of the general classification on Saturday, with Dunbar winning overall by nine seconds ahead of his British teammate Ben Tulett and 24 seconds ahead of the Swiss rider Marc Hirschi (UAE Team Emirates). Simon Carr (EF Education-EasyPost) was a further six seconds back in fourth.

It is the 25 year-old’s first professional victory and comes in the final year of his current contract with Ineos Grenadiers. The win is an important career breakthrough after years of riding strongly for others, but also being held back personally with illness and injury.

“I think we proved from the first few stages that we had the strongest team here,” Dunbar told Italian website Cyclingpro.net at the finish.

“Ineos are very experienced when they have a leader’s jersey in how to put in the correct strategy, and we did that today.

“We kept it under control. It was just up to me and Ben (Tulett) just to control the GC (general classification) guys. We really only had two guys to watch in, in Simon Carr and Hirschi. I think we rode the perfect race, really. We let the breakaway go, that took the stress away from the bonus seconds.

“I am very grateful to the team. They rode super all week and they backed me today. I am just happy I could finish it off and repay them with this victory.”

Dunbar’s success came after strong and confident performances throughout the five day stage race. He was the principal aggressor on last Tuesday’s opening leg to Riccione, attacking the other race contenders on the second category Montefiore Conca climb approximately 27 kilometres from the finish, cresting the summit alone and then being joined on the descent by Mauro Schmid (Quick-Step Alpha Vinyl Team).

While Schmid outsprinted Dunbar for the stage victory, the Swiss rider cracked completely on the hilly second stage and lost 16 minutes. Dunbar finished in the front group, taking over the race lead, and then defended it in the following day’s summit finish with an assured second place behind teammate Tulett.

On Friday he was to the fore in the 46-man bunch sprint which settled stage four, netting 13th despite his chain coming off in the sprint. He then rolled in beside his main rivals on Saturday’s concluding leg in 15th place. Overall victory aside, his consistency saw him finish third in the points classification and fourth in the mountains ranking. Ineos Grenadiers won the team classification.

Dunbar has taken a number of important placings during his career, including third on a stage of his first Grand Tour, the 2019 Giro d’Italia, third overall in the Tour de Yorkshire that same year and 12th overall in last year’s Tour de Suisse despite riding in support of his victorious teammate Richard Carapaz during the event.

Saturday’s victory is his first international win since taking the youth version of the Tour of Flanders in 2017. Crashes and sicknesses have meant that his considerable potential has until now not been matched by his results, but he is determined to build on his achievements of this week and chase more success.

“I am happy with this one,” he said. “I am going to enjoy the next few days and take it all in. It is just important now for me to just kick on from here and keep progressing.”