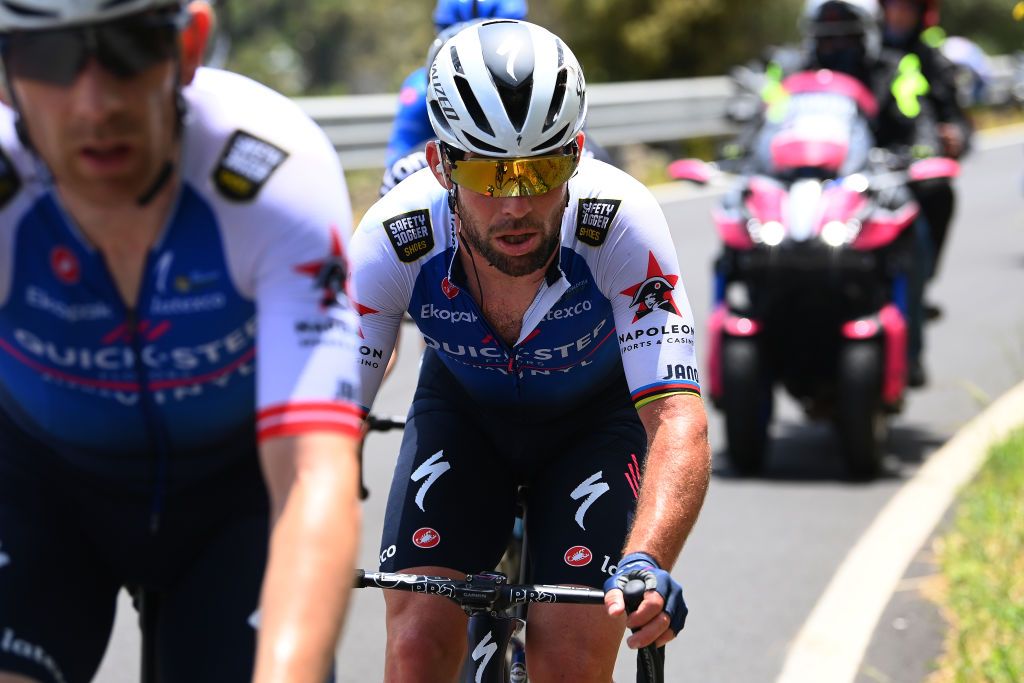 Mark Cavendish finished safely inside the time limit atop Mount Etna, carefully calibrating his effort on the first mountain stage of the 2022 Giro d’Italia in the hope of being at his best for the expected sprint finish in Messina on Wednesday and then in Scalea on Thursday.

Cavendish could be especially keen to win on Wednesday’s stage 5 as teammate Fabio Jakobsen starts the Tour de Hongrie. The opening stage could end in a sprint, giving both QuickStep-AlphaVinyl sprinters a chance to shine and confirm their claim to the team’s sole spot for the Tour de France.

Perhaps trying to save his legs as much as possible for the Messina sprint, Cavendish finished 35:51 down on stage winner Lennard Kämna (Bora-Hansgrohe), accompanied by his loyal teammates Pieter Serry, Michael Mørkøv and Bert Van Lerberghe at the very tail of the race. However, they were well inside the 49 minute time limit and looked at ease and in control, especially compared to Jakub Mareczko (Alpecin-Fenix) who suffered out the back, was alone for much of the stage, and eventually abandoned the Giro.

Like Mareczko, Cavendish suffered in the hilly opening hour of the stage from Avola but was well protected and escorted by his teammates and they managed to return to the peloton for the flatter middle section of the stage. He was then able to pace his effort on the 22.8km climb up the lava-covered slopes of Mount Etna to the finish.

Cavendish and QuickStep-AlphaVinyl were buoyed by the Manxman’s sprint win in Hungary and now hope to add further victories in the days to come.

The 174km fifth stage includes the Portella Mandrazzi climb to the north of Mount Etna after 75km. However, the final 80km are on flat roads around the Sicilian headland before heading south to finish in Messina. The sixth stage from Palmi to Scalea is a similar affair over 192km up the Calabrian coastline.

According to La Gazzetta dello Sport, Cavendish called former sprint rival and now Italian national coach Daniele Bennati to check that the Messina finish is the same s in 2018 when Fernando Gaviria won while riding for QuickStep.

The Manxman’s win in Balatonfüred was his 160th career win, his 16th stage win at the Giro d’Italia and his 53rd Grand Tour stage win. Cavendish is by far the most successful active rider. He is fifth in the list of all-time wins ranking led by Eddy Merckx with 283 victories. However, he is only two victories behind second-ranked Rik van Looy and only one victory behind Mario Cipollini and Roger De Vlaeminck.

Cavendish could climb up the all-time win ranking on the road to Messina and Scalea and has the full backing of QuickStep-AlphaVinyl.

“We don’t have a real GC contender this year here at the Giro, but we have a really good sprinter with Mark and a fantastic team around to support him. I think we brought here our best guys for the lead-out, and then we also have some guys for stage wins,” Team coach Vasilis Anastopoulos explained on Tuesday.

“Mark came to the Giro in the best possible condition. We did a training camp in Greece together, ten days of intense training, where he responded really well. We also have the data from last year when we had the same camp at the same place just before his Tour success, and all the info we had is really positive.”

Cavendish has developed a close bond with Anastopoulos, praising the Greek coach for helping him to return to his best in 2021 after suffering from Epstein-Barr virus and depression while at Dimension Data.

“The relationship between Mark and myself, between an athlete and a trainer, is a multi-faceted relationship,” Anastopoulos revealed.

“Cav has his own ideas, but he’s fair, he just demands what he deserves. At the beginning before he joined the team, maybe people thought that he’s not an easy character, but he has a big heart.

“Now Mark and myself just talk by the glimpse of an eye, we don’t need to use words. We communicate with our eyes. I know what I need to say in different circumstances.

“We worked a lot on his sprint capacity, but also on his endurance, on the long climbs to survive them, so it’s a mix of things. I think he arrived here lighter than last year, but also stronger and faster. The good thing is that Mark is happy and really positive – he was relaxed ahead of the Giro as he knows that all the work is done.”