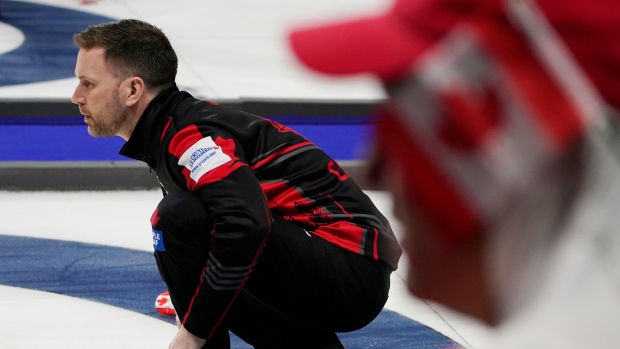 LAS VEGAS — Brad Gushue’s curling team started to find its groove Monday in a 10-4 win over Italy to stay unbeaten at the world men’s curling championship.

Canada was alone atop the standings at 5-0 after its lone game Monday. Gushue, Mark Nichols, Brett Gallant and Geoff Walker out of St. John’s, N.L., take on Germany on Tuesday.

Four wins on opening weekend plumped Canada’s record, but the skip felt they were white-knuckle affairs compared to Monday’s decisive victory over the Italians.

“Comfort-level, it’s growing,” Gushue said. “I thought the ice was a fair bit better than it was in the first four games. We had better control of draw weight which allowed us to set up and score some multiple points.”

Canada counted two in the second end and three in the fourth to lead 5-2. After Gushue stole a combined three points in the seventh and eighth ends, Joel Retornaz conceded.

The granite isn’t as lively as stones at last month’s Canadian men’s curling championship in Lethbridge, Alta., where Gushue and company won a fourth national title.

Gushue, Gallant and Walker played as a three-man team on the final weekend because Nichols had COVID-19.

The Orleans Arena ice was built and is maintained by USA Curling’s icemaker Shawn Olesen, and Canadian teams are less familiar with his product.

“These ice conditions, we’re not going to be able to play at the level that we played in Lethbridge or in Saskatoon at the (Olympic) trials, just because it’s not conducive,” Gushue said.

“With those misses you want to try and limit the damage that you do. So far we’ve been doing a good job with that.”

The top six teams at the conclusion of the round robin Friday advance to the playoffs, with the top two earning semifinal byes.

Seeds three through six play off Saturday to join them in the semis that night. The medal games are Sunday.

Gushue and Retornaz skip two of three teams competing in the world championship on the heels of their participation in February’s Olympic Games.

Five-time world champ Edin dropped two of his first four in Las Vegas to sit in a nine-country pile at 2-2 with a draw remaining at night Monday.

Retornaz was the only skip in the field with shooting accuracy over 80 per cent heading into Monday’s game against Canada. His third Amos Mosaner won Olympic mixed doubles curling gold with Stefania Constantini.

But Nichols far outcurled Mosaner at the vice position 98 per cent to 73, which correspondingly gave Gushue easier shots and Retornaz low-percentage throws.

“The first four games, it felt like every shot I threw was down a new path and a tough shot,” Gushue said. “Today, they left me some easy ones and I was able to execute them, with the exception of one there in the fifth end.

“They’re an extremely talented team and they’ll be around at the end of the week. The first four games, all of them could have gone either way. We were fortunate to pull them out. Made some really nice shots in the last couple ends.

“I think that just comes through experience and the fact we’ve played in a bunch of big moments. We didn’t get caught up in kind of the nervousness you can get when you play in the 10th end of a world championship game. We executed well in those situations.”

Gushue won the 2017 world championship in Edmonton followed by a runner-up result the following year in Las Vegas.

His team was unable to compete in the 2020 world championship in Glasgow, Scotland, because it was cancelled due to COVID-19.

The Orleans Arena is adjacent to the hotel and casino with the site a kilometre and a half west of the Vegas strip.

Gushue felt his team didn’t get enough of a mental reprieve from the tournament environment four years ago staying at the Orleans, so he and his teammates are living off-site this time around.

“We got out of the fishbowl,” the skip said. “We’ve learned from that experience, and so far, it’s been a much better experience for us off the ice.

“I think we’re in a much better place, much more relaxed and can kind of get away from the game, which is nice, especially with the year that we’ve been through. It seems like we haven’t gotten away from the game in months.”

This report by The Canadian Press was first published April 4, 2022.