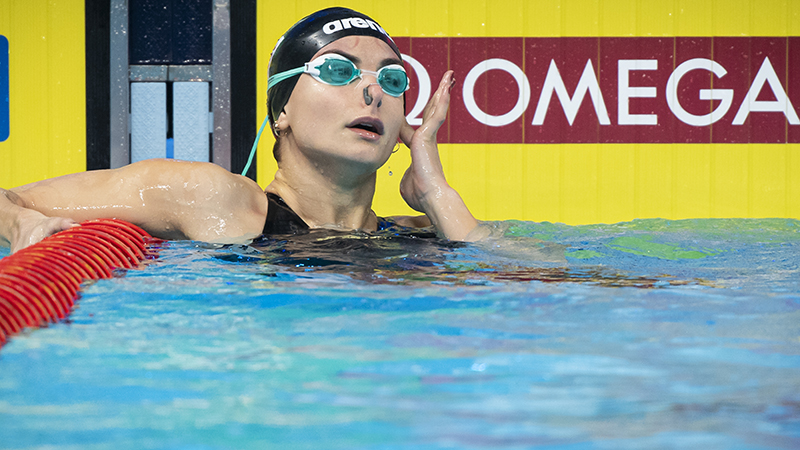 After what has been a relatively-sleepy week of qualifying meets around the globe, day 1 of the 2022 Italian Spring Championships on Saturday lit up scoreboards with Meet Records and even a European Junior Record.

That momentum continued into Sunday’s prelims session, where already Silvia Scalia has lowered the Italian Record in the 50 backstroke in the heats.

The World Championship standards are very fast this year, with some being even better than the Italian Record.

Each event has a Juniors Final, a B Final, and an A Final.

For the second time today, Silvia Scalia broke the Italian National Record in the 50 backstroke, blasting a 27.66 to win the gold in tonight’s final, shaving 0.08 from her morning effort. 200 backstroke specialist Margherita Panziera placed 2nd in 28.22. Scalia has now taken off a full 0.23 from her previous lifetime best from 2019.

Scalia qualifies for the 2022 FINA World Championships in Budapest, slipping 0.04 under the mark established by Italian Swimming. However, it is worth noting that Panziera hit the FINA ‘A’ cut on the dot with her 28.22. Scalia will also swim the 100 and 200 backstrokes, where she will arguably have a better shot at getting under the mark set by FIN in order to go to Budapest.

The men’s 50 fly was taken by National Record holder Piero Codia, however, in order for Codia to make the World Championships team in this race, he would have needed to improve upon his 2019 Record by 0.01 or greater, which he did not do today. Even so, Codia, as well as runner-up Lorenzo Gargani, both met the FINA ‘A’ standard in the race.

Matteo Rivolta, who lowered the Italian National Records in the 50 and 100 SCM butterflys in the fall of 2021 in the ISL and at the 2021 FINA World Championships, placed 3rd in 23.88, falling short of both the Italian qualifying standard as well as the FINA ‘A’ cut.

Though Di Pietro takes the gold medal and 2022 Italian National Title, she falls a full 1.3 seconds short of the World Championships qualifying standard set by Italian Swimming. Though we have seen numerous swimmers hit FINA ‘A’ cuts yet fail to make the qualifying standard set by Italian Swimming, this is one of the first races we have seen where no swimmer hit the FINA ‘A’ cut nor the Italian World Championships Standard.

Ceccon maintains his ranking as 2nd in the world this year behind Japan’s Ryosuke Irie, making him one of only two men to swim under 53 seconds in 2022 in the 100 LCM backstroke. Ceccon threw down a 53.06 at the 55è Challenge International de Genève in Switzerland in January, giving him a season best by 0.07 today.

Tokyo 2020 Olympian in the 200 breaststroke Francesca Fangio blasted a 2:23.60 to win the gold in her best event Sunday, claiming the title by over 2 seconds and posting the 4th-fastest time in the world this year. Despite the high ranking, Fangio still falls 0.60 short of the Italian qualifying standard in the race, while simultaneously being over 2 seconds under the FINA ‘A’ cut.

Though she had already established the lead at the 100-meter turn, Fangio really showed her dominance on the back end of the race, splitting 36.93/37.56 for a 1:14.49 versus a 1:09.11 on the first 100 for a split difference of 5.38 seconds. For reference, silver medalist Lisa Agiolini and bronze medalist Arianna Castiglioni had split differences of 6.40 seconds and 7.49 seconds, respectively.

Angiolini earned her silver in 2:25.64, which also comes in under the FINA ‘A’ cut, while Castiglioni, who qualified 2nd in the 100 breaststroke on Saturday behind Benedetta Pilato, placed 3rd in 2:27.17.

Tokyo 2020 Olympic bronze medalist Nicolo Martinenghi blasted a 58.57 to win gold in the men’s 100 breaststroke and punch his ticket to Budapest. Martinenghi was the only man under one minute in Sunday’s final, and easily slides under the qualification standard of 59.20 set by the Italian Swimming Federation. Martinenghi’s time also comes in as the 2nd-fastest in the world this year, just 0.05 behind Dutchman Arno Kamminga, the double-silver medalist in the breaststrokes from Tokyo, and 0.01 ahead of Great Britain’s Adam Peaty, the greatest sprint breaststroker to ever live and 2-time Olympic gold medalist in the 100 breast.

Martinenghi falls 0.29 short of his lifetime best and Italian Record, set at the Tokyo Olympic last summer, and ranks as the 6th-fastest swim of his career, and 10th time under the 59-second barrier. Martinenghi split 27.34/31.23, each split the fastest in the field. Runner-up Simone Cerasuolo was also out in under 28, hitting the half-way point in 27.92, and then produced a 32.70 on the second 50, meanwhile bronze medalist Andrea Castello swam a much more patient race, splitting 28.70 on the first 50 and a 32.01 on the second 50 for a total time of 1:00.71.

Alice Mizzau led start to finish in her effort to win the women’s 200 freestyle, posting a 1:59.59 to take gold, just 0.34 ahead of Alice Scarabelli, making them the only two women under 2 minutes in Sunday’s final.

Mizzau took the race out fast, splitting a 57.77 on the first 100, though she paid for it on the back half and despite winning the race, produced the 3rd-slowest closing 50 with a 31.28.

Similar to the women’s 100 butterfly from earlier in the session, this event produced zero new World Championships qualifiers as no swimmer was under the time set by Italian Swimming nor the FINA ‘A’ cut.

The team from C.C. Aniene began with the lead thanks to a 1:46.96 from Marco de Tullio, the fastest flat-start in the field, though with two consecutive 1:49s in the middle, they were out-performed by Centro Sportivo Esercito.

The fastest split overall in the race came from Stefano di Cola who posted a 1:45.47 as the second swimmer on the 4th-place team from G.S. Marina Militare, giving di Cola the distinction of being the only swimmer under 1:46 and the fastest by nearly a second in the race.